The cost of connectivity: why maintaining cell towers is one of America's most dangerous jobs

The job of maintaining U.S. cell towers is one of the most dangerousin the country, according to a new Frontline and ProPublica investigation. Layers of contractors and subcontractors pressures workers to do more in less time, and often values schedule over safety. The layers, meanwhile, insulate the carriers from ultimate responsibility. Wally Reardon, former tower climber and activist, explains what's gone wrong — and how it can be fixed.

Share All sharing options for: The cost of connectivity: why maintaining cell towers is one of America's most dangerous jobs

When U.S. cell carriers tout their latest and greatest data networks, promising blazing-fast data speeds and increased coverage, they typically don't mention the actual, physical labor involved in upgrading a cellular network. Blissfully abstract bandwidth numbers make it easy to forget where such high-speed connectivity comes from: namely, workers climbing towers hundreds of feet in the air and refitting them with new equipment.

A joint investigation by Frontline and ProPublica takes a look at those tower climbers – and why theirs is one of the most dangerous jobs in America. Between 2003 and 2011, 50 climbers were killed at cell sites around the country; many died in preventable falls, despite long-standing Occupational Safety and Health Administration regulations requiring safety harnesses.

The investigation found a widespread culture of "freeclimbing" — scaling towers with little or no safety equipment — fed in part by increased competitive pressure. As networks grow in size and complexity, climbers have to do more work in a shorter timespan. According to climbers, schedules trump safety. Ray Hull, a third-generation tower climber, was permanently disabled after falling more than 200 feet. His life was saved by a safety harness, but Hull believes the accident wouldn't have happened without pressure he felt from Nextel: before his final climb, he’d made a twenty-hour drive from Nebraska to Texas and back, forgoing sleep to keep on schedule.

Frontline and ProPublica also found a layer of "turf vendors," large firms such as General Dynamics and Bechtel, who subcontract tower work to even smaller vendors. This arrangement, intentionally or not, insulates carriers from legal responsibility. OSHA doesn’t connect subcontractors to carriers, and if a subcontractor shuts down for safety violations, it can often just re-form under a new name. 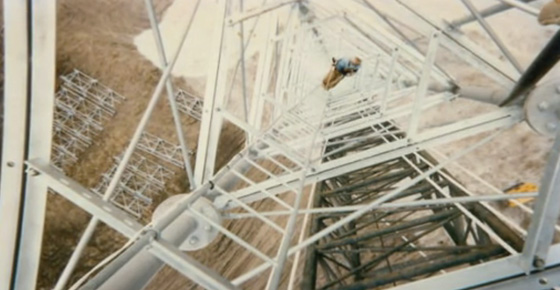 Between 2006 and 2008, for example, during a network build-out, 11 climbers died at AT&T sites — more than at the other major carriers combined. To its credit, the company took notice, halting work and reaffirming its commitment to safety. But the overall effect is unclear; deaths are down since 2008, but veteran climbers predict another increase in falls with the build-out of 4G LTE. And the question of ultimate responsibility remains open. Ed Reynolds, former network president at the company, told Frontline, "You can say that Randall Stephenson is responsible because Randall Stephenson’s the CEO of AT&T. But what impact saying that Randall Stephenson is responsible for that, would have on the eventual safety of future crews, I think that’s too far to connect. At what point do you connect? I don’t know."

We talked to Wally Reardon, Project Coordinator at the Workers at Heights Safety & Health Initiative, about what puts climbers at risk, and what can be done to keep them safe. Reardon spent a decade climbing towers; he cut his teeth maintaining grain elevators at a feed mill before moving into tower climbing in 1992. Climbers, he says, were mostly young men with few attachments. His crew fell into two types: the strait-laced guys with religious convictions and the hard-chargers who liked the adventure and liked being on the road. "I kind of fit that category when I first started," he says, "I liked that rough-housing, drinking, macho mentality."

Freeclimbing was common even then. But what changed, in Reardon’s telling, is the pace and make-up of the industry. In his time, he worked directly with the carriers. "You know, back then it would be like Cellular One and RochesterTel," he says. "They were our main customers, and we did most of the work for them. And that paid our bills." Only later did turf vendors move in, taking a cut for subcontracting out the work. "All these companies," Reardon says, "from my point of view, tend to be the bullies, the strong-arms who insulate the carriers from any accountability for injuries or fatalities at their sites." According to him, that means high-pressure schedules and, often, withholding payment for months after the work’s completed.

That change began around the same time OSHA established its "100-percent tie-off rule," mandating safety harnesses for any work about six feet. Theoretically, if followed it would prevent all deaths from falls. But as climbers already knew, most safety equipment available at the time was designed for skyscrapers, not cell towers; it assumed horizontal anchors where cell towers were primarily vertical. Climbers often jury-rigged their own equipment to make it more comfortable and effective. The OSHA mandate eliminated that freedom. But it also didn’t provide enhanced oversight. To Reardon’s mind, the agency’s simply undermanned and underfunded. "They can't possibly get out to a tower site and go chasing tower climbers," he says, "because tower sites are scattered all over the place, and crews are in small numbers – it's hard to tell where they're going. So OSHA really has their hands full, across all industries they have authority over." 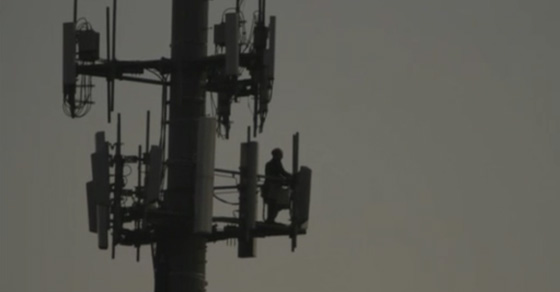 Without strong oversight, the culture of freeclimbing persists. It’s a subtle pressure, Reardon explains: "In fact, I never heard a boss telling us to freeclimb. Never, in my entire career. But you know what you gotta do to keep up. This is why guys are falling." The National Association of Tower Erectors promotes the message: "Tie or Die: It's up to You." Reardon thinks that places the burden on individual climbers, when a more systemic change is needed.

"The most important change that needs to take place is more involvement from the carriers. I'd like to see them become more proactive about what's going on at their sites. Unfortunately, from their point of view, if they acknowledge that, I think they feel they're going to be held liable to be aware that this is going on and to take some measures to do something about it." At the same time, he says, climbers need to police each other. It may sound unfair, but reporting dangerous freeclimbing may be the only way to curb it. Only then will consequences accumulate within the system. Finally, though, Reardon says, "We have to start practicing what we preach: 100-percent tie-off has to be 100-percent tie-off."