At NYU's annual No Quarter exhibition, the communal comforts of yesterday's game spaces live on apart from the commercial arena they once occupied, acting as a testing ground for new titles from some of the world's top independent developers.

Share All sharing options for: 'No Quarter': building modern arcade games at NYU

If the anesthetized, family-oriented digs of the recently reopened Chinatown Fair are any indication, the state of the American arcade in the year 2012 is a dismal one. But at NYU's annual No Quarter exhibition, the communal comforts of yesterday's game spaces live on apart from the commercial arena they once occupied, acting as a testing ground for new titles from some of the world's top independent developers.

In the past, No Quarter has helped premiere several indie games that went on to become hugely popular, like Mark Essen's lo-res fencing game, Nidhogg. As a commission-based exhibition, it's an opportunity for developers to experiment with ideas that they might have not pursued otherwise. The goal is to assemble a selection of games that work best as part of a larger social environment, a phenomenon that curator Charles Pratt and others have referred to as "the New Arcade."

"Since the decline of the arcade in the West, there's been less of a chance to get together and play video games or non-digital games — not just with each other and in one room, but around an audience," says Pratt, a staff member at the NYU Game Center. He emphasizes the unique dynamic which emerges when games become not just public diversions, but a source of conversation within a social setting. "It was really important to us to help cultivate and conserve the energy that gets produced when you design for that kind of space."

Stepping off the elevators onto the NYU Tisch building's 9th floor, one of the first games immediately visible was actually a non-digital card game. Designed by Zach Gage, creator of popular iOS games Spelltower and Bit Pilot, Guts of Glory is like a more approachable version of Magic: The Gathering themed around post-apocalyptic gastronomy. Each participant draws a 5-card hand — the player's "mouth" — and takes turns strategically "chewing" and "spewing" the different foods those cards represent to acquire points.

The game's vocabulary is, obviously, pretty unique. "You're trying to accumulate abilities to help you chew and swallow foods with points on them faster," explains Gage. "It's this kind of mix of trying to have the things you need to get the points you want, but also trying to keep your mouth not totally full, so you don't have to spew." The "spew" mechanic makes it so that other players can get significantly more points from the cards in your hand, if you don't manage them properly. 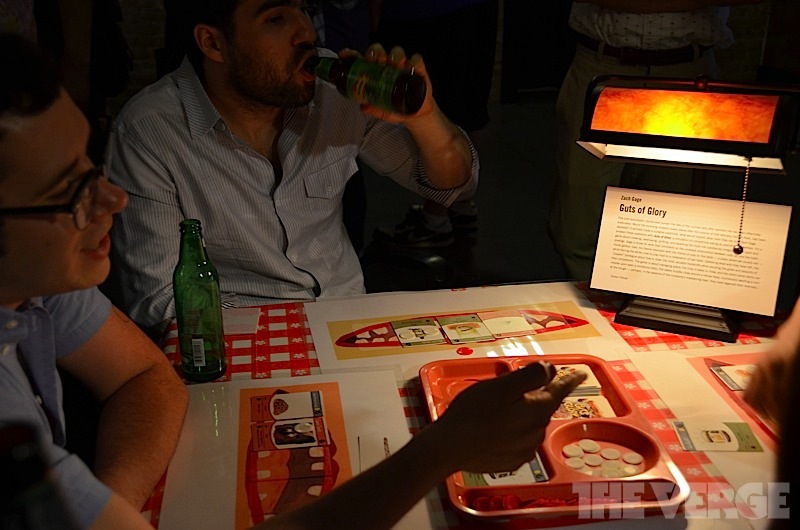 Behind the card tables, large crowds huddled around wall-mounted screens displaying Tenness, a delightfully bizarre permutation of the physical sport by Super Crate Box co-creator Jan Willem Nijman, and BaraBariBall, a psychedelic competitive platformer by Noah Sasso heavily inspired by Super Smash Bros. As video games played with regular controller interfaces, they were uncharacteristically outnumbered by the non-digital and physical games on display at the event this year.

Across from them sat Margaret Robertson's tabletop game, Drunk Dungeon, a collaborative dungeon crawling puzzle that had players connect specially-designed game pieces on an enormous table to score points for their team. It was possibly the most-played game of the evening, being as how the game pieces were actually coasters, distributed to everyone who got a drink from the bar. (The drinks were free, and the line, understandably, quite long.)

Finally, inside a darkened room, Syed Salahuddin's YaMove used armbands equipped with iPod Touches to digitally moderate improvised, team-based dance battles. The computer judges each team based on the synchronicity, energy, and "creativity" of their movements and awards the winners after several call-and-response rounds — a modern take on the 'B-boy' freestyle street competitions of decades past.

"The great thing about making a game is you can create this 'safe space' — a magic circle where people can just feel comfortable being themselves."

"When I first started, I realized it was really hard to make people dance on command," says Salahuddin, who designed the game along with a team from NYU Poly as an event-specific installation for No Quarter, complete with a live DJ, choreographer, and breakdancers. He notes the difficulty of designing around issues like body image in a game that elicits physical expression in a public setting. "The great thing about making a game is you can create this sort of 'safe space' — this magic circle where people can just feel comfortable being themselves and being totally honest."

No Quarter is now in its third year and going strong. But outside of dedicated institutional patrons like NYU, can the new arcade movement stand on its own two legs? Pratt says that the momentum, at least, is definitely there: In the past few years, groups like NYC's Babycastles, the Toronto Hand Eye Society, and the Austin-based Juegos Rancheros have been contributing to the growth of social gaming spaces, organizing one-off events and week-long exhibitions taking place inside DIY music venues, museums, and even outdoor public spaces.

Games like Die Gute Fabrik's Johann Sebastian Joust and travelling arcade cabinets like the Winnitron have also helped to expand the reach of the movement even further, bringing together communities from various cities around the globe to share and discuss new works in a live social context. "It's also about giving designers a chance to work in that kind of space," says Pratt of the global village these games and events create. "It's a completely different set of challenges that excites a lot of game designers, especially independent game designers."