The last two years have seen Conan O'Brien undergo a significant reinvention — he's moved from "sitting behind the desk of one of the most iconic brands in old, traditional network television" to the master of all things social, with millions of engaged fans consuming the Coco brand across nearly all media outlets, both old and new.

Share All sharing options for: Conan O'Brien on the 'symbiotic relationship' of his audience and new media

The last two years have seen Conan O'Brien undergo a significant reinvention — he's moved from "sitting behind the desk of one of the most iconic brands in old, traditional network television" to the master of all things social, with millions of engaged fans consuming the Coco brand across nearly all media outlets, both old and new (his @ConanOBrien Twitter account hit one million followers in just three months). O'Brien's headlining appearance at the 2012 Cable Show, in his hometown of Boston, was a refreshing change of pace from two days of panels featuring network and service provider executives — in both entertainment value and innovative ideas.

He quickly realized this wasn't his normal audience, and chided the room full of media and industry players for their positive but restrained welcome. "I just want to feed off their energy for a second," O'Brien joked as he sat down with Piers Morgan for a conversation that quickly revealed a more forward-thinking attitude towards his product than most of the industry players who spoke this week.

There's a good reason for that: as has been told many times, O'Brien tried to ascend the throne of old media back in late 2009, only to find himself thrown off and forced to rethink the way he connects with his audience. He described the experience as "fascinating," saying that "I felt like I was standing with one foot in traditional broadcasting and one foot in this new world that we're all trying to figure out, and the divide ran right through me. I had to make a jump one way or another and last year and half has been myself and my team trying to figure out, 'what is this new world we're in?'"

"I was forced to embrace this world and figure out how to use it."

Despite describing himself as a "luddite," O'Brien's social media strategy has been a defining characteristic of his post-Tonight Show work — Morgan cited his 5.6 million Twitter followers (compared to Jay Leno's 376,000) and the 1.86 million Facebook "likes" for Conan compared to the 429,000 for The Tonight Show. O'Brien gave Leno a pass, saying that he's "really busy," but went on to describe in detail the "symbiotic relationship" he's fostering with his audience. "It's not just driving people on social media networks to your television show... you want to get people on the TV getting emotionally involved in what you're doing on Facebook or Twitter."

It's quite a change from his NBC days, when "we had a Late Night page, but it was the same website page that a dry cleaner would have." Probably the most illustrative experience of this new relationship O'Brien shared was when Will Ferrell announced the new Anchorman sequel on O'Brien's show. Instead of preciously guarding the material until the show went live at 11pm, the Conan team immediately went into action — the material was "chopped up into bite-sized pieces" and distributed through O'Brien's social networks to build up a buzz for the eventual live show airing.

O'Brien notes that this never would have happened when he got started back in 1993 — not just because of technological limitations, but because "there was an obsession in the business not to give anything away." That's hardly the case anymore; O'Brien said that "you can show [fans] exactly what Will Ferrell did on the show and get it out there, so there's no surprise. But what happens is it goes everywhere, and... created a wave of viewership for us that drove the more traditional viewing numbers."

"There was an obsession in this business not to give anything away."

While O'Brien seems to be enjoying the increased engagement he has with his audience, its a strategy that was born out of necessity. "The day of 'I only want people to experience me at 11 o'clock, on TBS' — those days are over," O'Brien said. "The audience is too fractured, they're too distracted... a whole generation of people is growing up that doesn't watch television that way." Fortunately for O'Brien, "Turner has been absolutely a dream come true... they're up for anything we're up for, and they're agile." He went on to compare the experience of working for NBC to running "a tiny little comedy club on a giant cruise ship... the ship takes big, long, slow turns, and we have about that much control over our destiny." 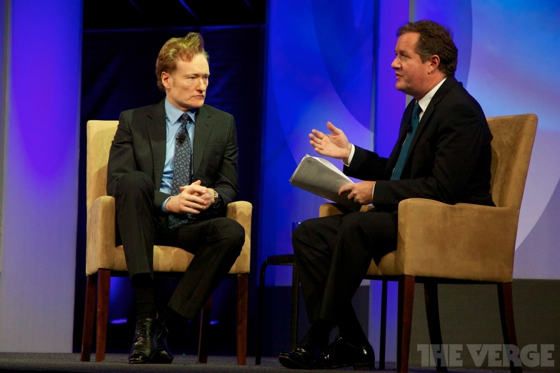 While O'Brien is quick to credit his young and agile team for their work in getting his message out to the masses, it was pretty clear that he takes technological innovation seriously. He cited the example of Walt Disney, who "never met a technology that he was afraid of," noting that Disney constantly adapted and incorporated new technology throughout his career as he progressed from still cartoons, to animation, to feature-length films, to theme parks, and to television programming. "He always embraced technology, he always embraced the next thing, and... my attitude over the last couple years has been 'adapt or die.'"

"Walt Disney never met a technology that he was afraid of."

Despite the well-publicized loss of his dream job, O'Brien no longer seems to bear the bitterness that followed him post-Tonight Show, saying that "the last year and a half has just been a complete affirmation that this [strategy] is the way to go." And while cable operators and network executives struggle to give consumers what they want — which is the content they pay for, where and when they want — he couldn't care less what screen his audience watches on, or how they get it, just so long as he reaches them one way or another. Morgan asked if he was bothered by the multitudes of ways people might watch his show (aside from tuning in live). Without pause or hesitation, O'Brien emphatically responded, "no, not in the least."