The LG LS860 "Cayenne" is allegedly a 4-inch Android 4.0 smartphone with a dual-core processor and a sliding five-row QWERTY keyboard.

BriefMobile's tipster has done it again, bringing us another leaked image of a rumored high-end LG smartphone. This time, however, the handset's claim to fame isn't a quad-core processor or a 13-megapixel camera: rather, the LG LS860 "Cayenne" allegedly has the neatly staggered five-row QWERTY keyboard, 4-inch IPS screen, and 1.2GHz dual-core processor it needs to be a competent Droid 4 competitor. While we wouldn't dream of suggesting that the supposed Sprint LTE smartphone might succeed without even seeing the device in the flesh, we sure hope BriefMobile is right that the slider will come with Android 4.0 right from the beginning. After all, Motorola's Droid 4 won't see an Ice Cream Sandwich update until Q3, and there are precious few high-end handsets with physical keyboards in today's market. 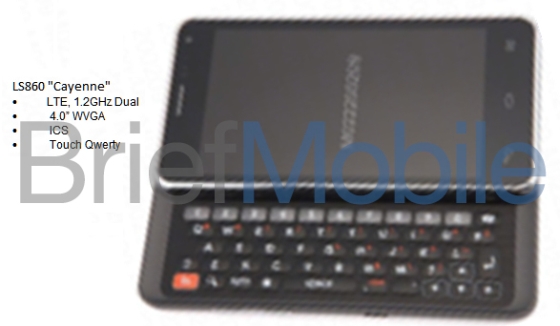