Share All sharing options for: Coda 2.0 and Diet Coda for iPad preview

Panic, a long-time Mac app developer that you may know from the Transmit FTP client or Unison Usenet browser, is finally upgrading its Coda web editor to 2.0 today with a completely revamped interface and hundreds of new features. Note that even though the Panic team has included a full list of reference books on everything from CSS and HTML to Python and Git, the app is for people that write code or are learning. The update has been a long time coming; the first version of the app came out nearly five years ago. Developers and designers swear by their apps, and Coda's built a solid following over the years. Additionally, Panic's also launching Diet Coda for iPad, which can work as both a companion preview screen of whatever you’re working on in the desktop app and a standalone editor. How do they hold up to a few hours of tinkering and code writing? Read on!

Coda's been around since 2007, and the 1.x version is definitely showing its age — no surprise considering it was originally developed for OS 10.4 Tiger. CSS editing used to be relegated to a clunky UI somewhere between WYSIWIG and plain text, and the whole process of dealing with multiple open files was inspired but never quite worked out that well in practice. Coda 2.0 is a bit glossier and looks much more at home in Lion, but after digging around for an hour or so, I found that the new interface is much improved for moving between folders, servers, and files. 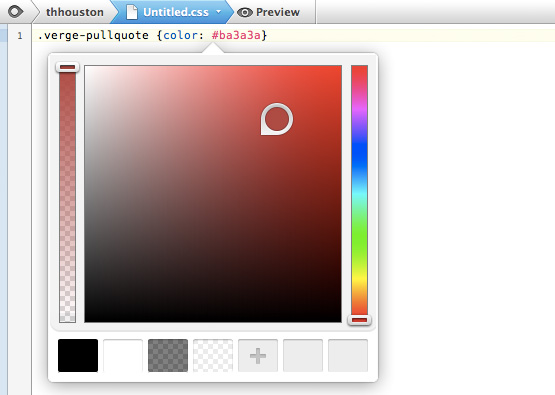 At the top of the window, there is a tab section and thumbnails of the files (CSS, MySQL, reference books, etc...) that you're currently working with. Perhaps sacrilegious to the text-only crew, but it's handy if you're quickly jumping between several files at the same time. As you're editing a file, the UI reveals the full path, and you can click any of those sections to reveal a directory listing. It's most powerful when you're logged into a FTP server and making live updates to a site's files. It's a really smart addition, and much easier than digging through folders or firing up Spotlight. Pictured above is the visual CSS editor, which reveals first color selections and then a full color picker as you type in CSS elements.

There are a ton of new features here, from better indentation and code folding to a MySQL editor and better code validation. The main takeaway is that it's generally more efficient to get to the files you need and to do the things you do. If you don't know how to code, you're not going to be magically whipping up new HTML5-compliant sites in a few hours. But if you know what you're doing — or have read tons of online tutorials and have some notion of the difference between a CSS id and class — the Panic team's improvements go a long way towards making coding a smoother process. 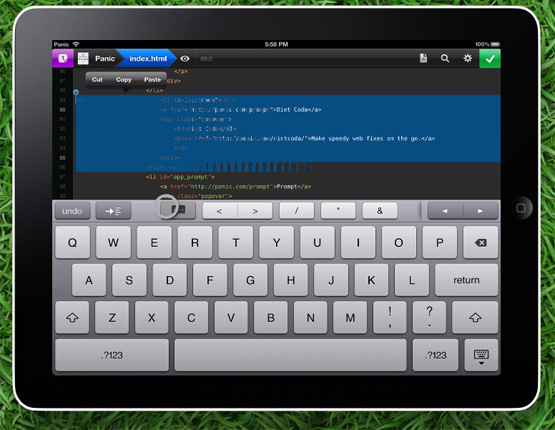 Say all you want about consumption versus creation on the iPad, but dealing with thousands of lines of code in any kind of document on a touchscreen device — without a hard line connection to command-Z — isn’t currently the most appealing of options. And it’s worth noting that Panic fully understands this with its release of Diet Coda app for the iPad, even advertising the app for making "quick web fixes on the go." Making quick updates to live files on a tablet is often a balancing wire act, and Diet Coda takes it into consideration. Predictive text and a strong set of clips for quickly adding lists or page structure — as well as a UI designed from the ground up for the iPad — make this as smooth as possible.

Obviously, there hasn't previously been much directory file management on the iPad, and Panic’s figured out one way to do it in a way for server files that is similar to the implementation on the desktop app. Tap the top left purple button to reveal all of your sites, terminal access, and all files you’re currently working on — it’s a bit like the inverted version of the traditional iOS multitasking. It’s very smooth, and doesn’t require any overlays or traditional menus.

First up, there's no offline editing. You'll need to have a working connection in order to edit and update lives files. The file management is about as good as you can expect on a touch interface, and for making quick tweaks, the whole setup is surprisingly good. If you're looking to do some more in-depth work — and to the app's credit, it's more than capable — Diet Coda has solid Bluetooth keyboard support and shortcuts for faster editing, typing, and code navigation. Even if you're not using the app for coding, the AirPreview feature lets you mirror the full web preview from the desktop app on your iPad.

One of the best new features — and something we'd like to see integrated into other apps — is the Super Loupe. Press and hold any selection of text, and a full-width horizontal overlay appears instead of the usual iOS magnifying glass. Sure, it's a bit flashy, but it makes it much easier to stay on a single line, because tiny variations in your finger's movement make it very clear that you're moving up or down. I’ve been testing the app on a first generation iPad, and it’s worth noting how much faster moving around within Diet Coda is than moving around the rest of the OS.

Diet Coda does as much as possible to make dealing with documents on the iPad bearable, and if you're already a Coda user, the AirPreview feature alone is worth the $9.99 price. You're probably not going to be coding huge sites from Diet Coda, but, especially if you've got a model with a data connection, it's one of the most polished solutions we've seen yet for dealing with quick tweaks and fixes on the go. Current Coda users should definitely consider the upgrade. Diet Coda is available now for $9.99 and Coda will be both a paid update, and available for 50% off for the first 24 hours.