Google updated the Google+ app for Android today, bringing a complete new look and the ability to start a Hangout from your phone.

Google updated the Google+ iOS app recently with a complete visual overhaul, and now the company's brought the new look to Android as well – plus a few unique tricks. For one, version 2.6 of Google+ for Android now allows you to start a Hangout directly from your phone; you could previously join a Hangout in progress, but you couldn't actually initiate one unless you used the separate Messenger app. The new feature means you can choose a Hangout instead of a phone call or Skype call, which is a nice move for Google — the "incoming Hangout" screen even looks like you're answering a phone call.

The rest of the update is devoted to bringing the Android interface up to par with the Google+ experience for iOS. There's a new slide-out navigation bar for moving around the various parts, instead of always having to go back to the home screen to switch views. The stream has a new look, with full-width media and easily accessible +1 buttons. You can now edit posts inline, or download photos directly from Google+ to your phone. The app was previously fairly basic and simple, and this update brings a much-needed visual flair to the Android experience. 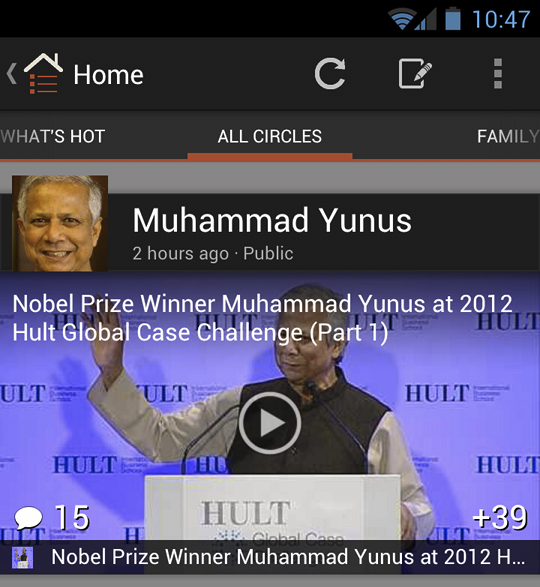