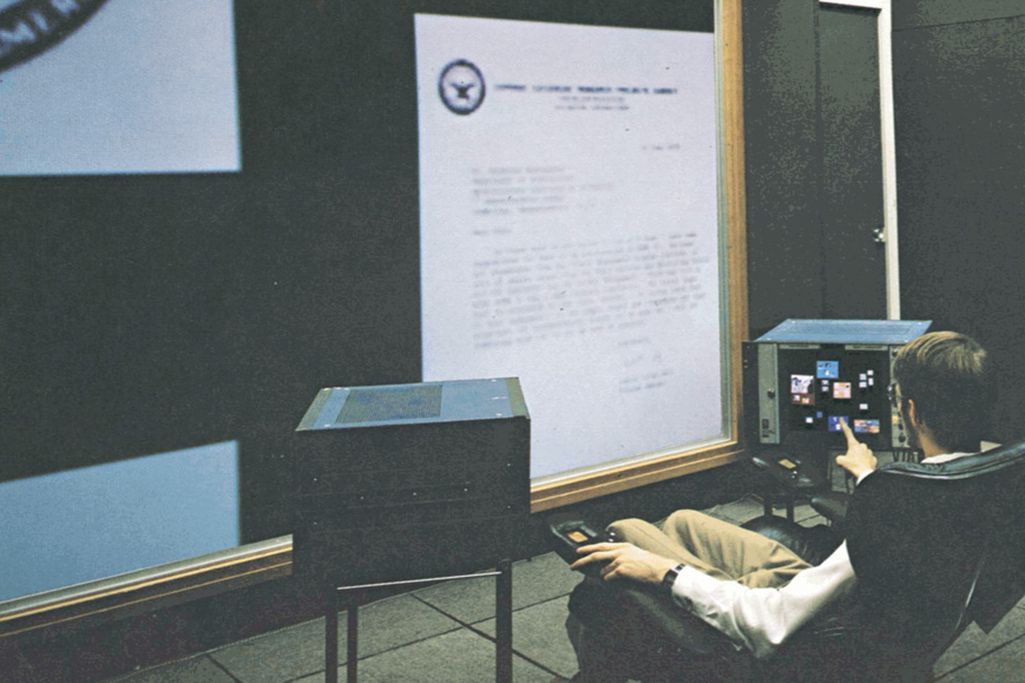 In research for our latest Future Passed piece, I came across the mention of "Dataland" and a spatial data-management system. Hardly the most exciting-sounding concept, couched in academic technobureaucratese from the late '70s, but I started digging around in old forums and email lists, with the hope of finding more about this photo mentioned in The Computer Age: A Twenty Year View. I eventually hit internet gold, finding the original spatial-data-management system study PDF deep in the MIT archives at the Speech interface Group.

Granted, MIT and many other academic and government institutions have come up with countless interface and computer design ideas over the years, but this one has a direct connection to the history of popular user interface design. Apple Macintosh team member and computer scientist Andy Hertzfeld wrote that "DataLand" directly influenced the designers of the original Mac after they saw it at MIT, and explains that Bill Atkinson "adapted the idea for Lisa, allowing icons representing files and directories to be positioned on a scrolling, semi-infinite plane."

How do we find, organize, and manipulate data in a digital age? Variations of command line tools and countless graphical user interfaces have popped up over the years to answer that question. The SDMS system grew out of research with the Office of Naval Research and with support from DARPA, and can be concisely described as a way to use virtual space as the organizing element for information. MIT's Principal Research Scientist Dr. Richard A. Bolt authored the study, and his 1979 paper kicks off with a prologue from none other than Nicholas Negroponte, who writes:

"Such startling advances and cost reductions are occurring in microelectronics that we believe future systems will not be characterized by their memory size or processing speed. Instead, the human interface will become the major measure, calibrated in very subjective units, so sensory and personalized that it will be evaluated by feelings and perceptions. Is it easy to use? Does it feel good? Is it pleasurable?" 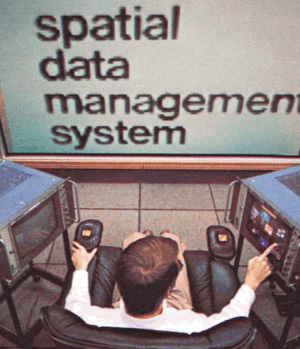 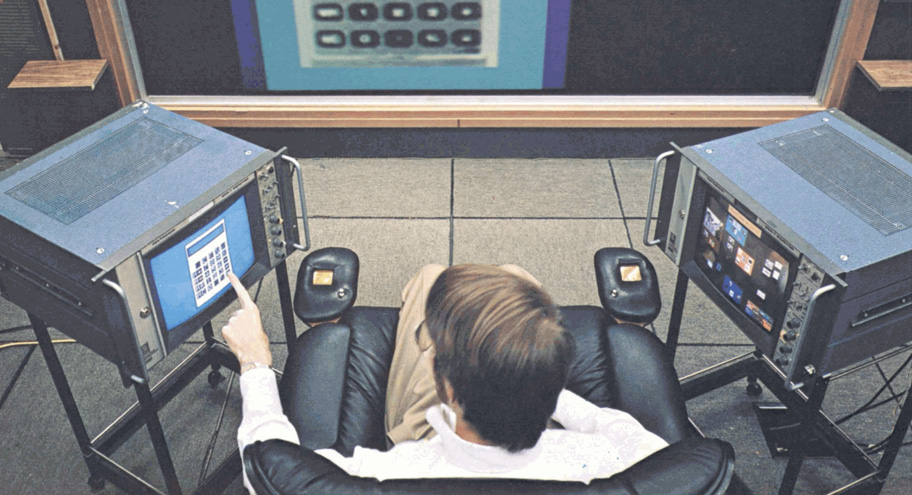 Growing out of a MIT Architecture Machine Group (a predecessor to the MIT Media Lab) proposal in 1976 for research on "Augmentation of Human Resources in Command and Control through Multiple Media Man-Machine Interaction," SDMS is organized around the well-known connection between memory and spatial organization. Historically, the memory palace was a common technique for improving human memory, and the paper specifically mentions the "Simonides effect."

Briefly, the ancient Greek poet Simonides (p. 8) mentally associated parts of a long speech or story with specific rooms in a temple, and the statues and unique parts of each room could be used as additional markers. Mentally tracing a path through the temple in one's mind helped the speaker reconstruct the individual parts of a poem, with each room or element effectively serving as memory storage. Leaping forward thousands of years, the SDMS proposed "the creation of an information management system whose distinguishing characteristic is that it exploits the user's sense of spatiality for purposes of organizing and retrieving data."

The SDMS "office of the future" features an instrument-augmented Eames chair, with each armrest containing a joystick and touch-sensitive pad. The chair is also outfitted with a ten-inch-square tablet with stylus — it's upholstered for sitting on the user's lap. Filling the user's vision is a large, wall-sized screen. Two touch-sensitive monitors are located on either side of the chair and can receive gesture inputs, and eight speakers offer "octaphonic" sound. It's notable that there's no keyboard in this setup, though Bolt does mention it's not a mandatory absence. Instead of providing a tiny "'port-hole' into an information bank," this SDMS setup surrounds the user in data that can be touched, heard, and seen. 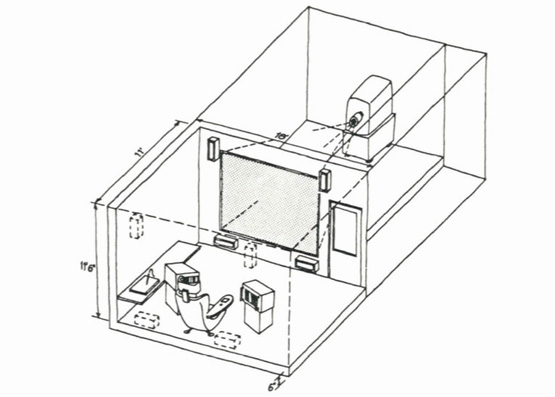 Hard drives were still pretty tiny at the time and prohibitively expensive, especially considering the glut of storage required by the SDMS's ability to deal with video and high-resolution maps and images. Fortunately, a sub-$2500 laser-scanned disk system was added, and could hold over "54,000 individual frames" per disk. 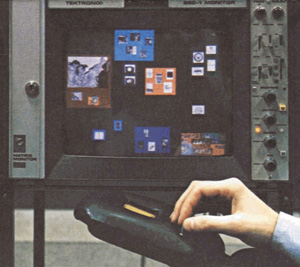 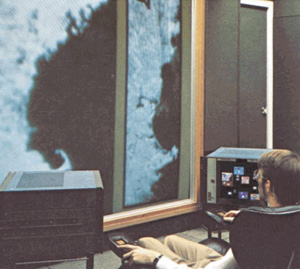 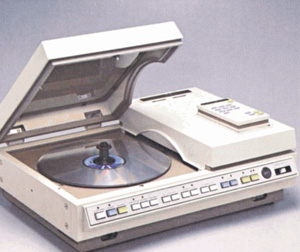 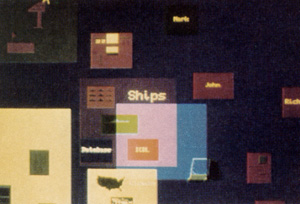 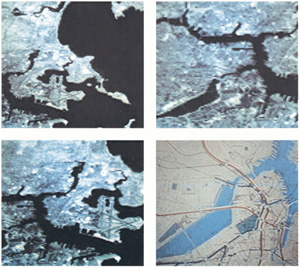 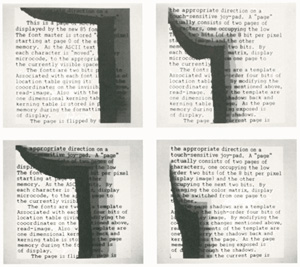 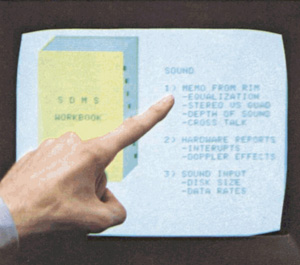 Moving away from the hardware, the virtual space is dubbed "Dataland," and consists of a 2 1/2D plane with ports that offer access to additional panes. One of the nearby TV monitors will always show the full world view, and the room's large screen functions as a window onto that selected surface. To the left, you can see a prototype of that view from another paper around the same time, "A Prototype Spatial Data Management System." Compared to Lion's multiple desktops, for example, the primary screen would show just a single desktop, while all of your other desktops would be visible and just a touch away on a nearby monitor. The system offers two primary ways of navigation: the joystick lets users fly with "helicopter-like" flight over the data landscape, or the user can simply touch a section on the world view to be transported directly. You can also navigate through portals in each level to "lower" levels. 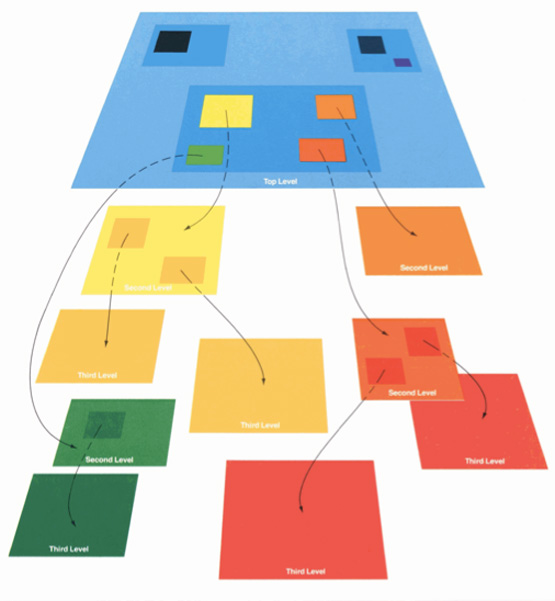 While they're not updating dynamically, maps aren't a far cry from the Google Maps we know today. Pushing forward on the left joystick zooms in on the map, and the auxiliary monitor provides a larger world view so that you know exactly what part of a map you're zoomed in on. Also familiar is an image "blockiness" that appears while moving in, but gets replaced with a clean image due to the "digital nature of the television image."

Many of the user interface ideas that we use today are seen here, almost fully formed. The debates still raging over ebook design and reading interfaces are also considered here, and page 31 even reveals a page swipe animation initiated by the stroke of a finger. Note that even in the 1970s there were concerns about the page swipe being nostalgic and frivolous. Bolt writes, "the intent is not to give a nostalgic impression of the way books used to look, like the electric fireplace with back-lit logs." He goes on to say continuous scrolling doesn't give readers a good sense of reading progress, and page-flipping provides effective, direct feedback.

Glyphs (early icons) sit on the Dataland surface and represent different data types. An on-screen, touch-based calculator provides all the functions. Zooming in on the black-and-white Sony television glyph brings live video up, letting the viewer watch (p. 35) "Columbo, The Sting, or a documentary on how to stop smoking." Anything that can be viewed on this virtual set can be recorded and played back at any time, perfect for when the operator wants to "view the twelve o'clock news, or see a rerun of some footage that was taped earlier." How far we've come. 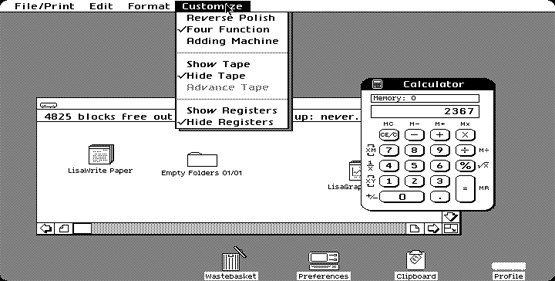 What's most interesting here is how early designers, computer scientists, and academics were considering many questions that are still central to how we design our devices, apps, and digital spaces today. The graphical user interface as we know it didn't just appear, fully formed from Xerox's PARC, or later Apple Computer — it's had a long history of thought and development. The SDMS study explored new ways for humans to interact with data outside of the traditional command line. By creating a virtual space to reach, tap, swipe, and move around in, the SDMS lets the user develop a "motor memory" (p. 6) for common tasks.

In the prologue, Negroponte also writes, "It is this interface that will bring computers directly to generals, presidents of companies, and six-year-old children." It's these natural, approachable design ideas, tied to a relatable real-world desktop, that probably attracted the original Macintosh developers. In "Inventing the Lisa User Interface," Apple designers Rod Perkins, Dan Keller, and Frank Ludolph explain Dataland was far from a perfect system. "The idea was incredibly simple but placed quite a burden on the user’s memory when the number of documents became large." Still, the software team that went on to create the Lisa and Desktop Manager found something in the approachability of the system.

We were drawn to the simplicity of M.I.T.’s Dataland but thought that we needed something more familiar to the office worker. Our newly formed Macintosh group was also experimenting with icons for its Finder. Slowly, we were migrating back to icons for the sake of simplicity and approachability. 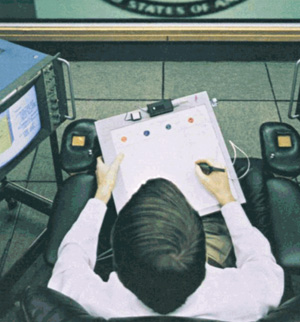