Nvidia CEO: GeForce Grid 'will do for video games what cable television did for video'

Share All sharing options for: Nvidia CEO: GeForce Grid 'will do for video games what cable television did for video'

"The skiing industry would be a lot larger if you could just go do it," explains Nvidia CEO Jen-Hsun Huang. There isn't a ski pole in sight: it's a metaphor for how he wants to expand the reach of video games to entirely new audiences. Two weeks ago, at the company's GPU Technology Conference, Huang introduced a new technology on stage: a GPU called GeForce Grid, specifically designed to stream video games to any smartphone, tablet, PC, or app-savvy TV. Today, however, at the company's annual investor meeting, Huang has revealed that his company is looking to make graphically potent games more portable and convenient for everyone, not just existing players. "The entire video game market is still relatively small," he says, telling us that cloud gaming can bring what he characterizes as an enthusiast hobby to a billion new gamers. 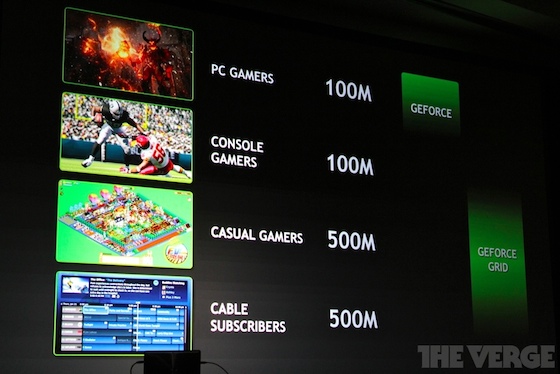 "We believe this will do for video games what cable television did for video," says Huang. "Convenience is worth a lot of money."

Nvidia doesn't provide a cloud gaming service itself, just hardware that reduces the lag when generating, compressing, and streaming those frames; companies like OnLive and Nvidia's GeForce Grid partner Gaikai license and stream the actual game titles from remote servers. Though OnLive has already commercialized its service and sells both individual games and a Netflix-like subscription of back-catalog titles, neither it nor Gaikai has committed to being carried by a service provider as a cable-like offering. Still, when Nvidia CEO Jen-Hsun Huang talks about the vision, that familiar cable experience is quite literally the dream: "You flip to the game channel... bam, you're playing games."