Several text strings have been discovered in the latest version of the Google+ app for Android that indicated Google may be preparing to deploy new features in Google+ called "Events" and "Local."

Share All sharing options for: Google prepping 'Events' and 'Local' features for Google+?

Google rolled out version 2.6 of the Google+ app for Android today, updating its UI and adding several new features, but it appears to have left something hidden under the hood as well. A source informed us — and we have confirmed — that inside the APK for the new Google+ app are references to features called "Events" and "Local," listed alongside Photos, Circles, and the other modules currently found in the app's navigation pane. Of course, the discovery unto itself doesn't mean that the features are immediately forthcoming, but the incorporation of events as well as geolocation-oriented functionality are obvious areas for Google to explore as it brings its social network up to par with Facebook. We'll continue to dig, and will let you know what else we discover. 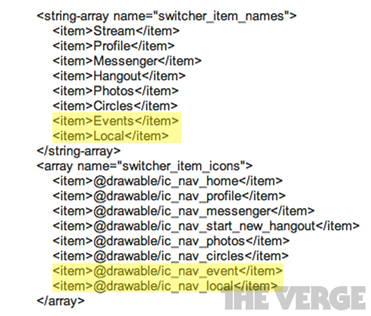