Dell is said to be preparing two Windows 8 tablets, the Latitude 10 and XPS 12.

While Dell has previously promised a Windows 8 enterprise tablet "on the exact day" the new operating system debuts, we haven't heard any firm plans for its consumer offerings. Neowin has posted two separate images of what it claims are Dell's two Windows 8 tablets. The XPS 12 is said to be a convertible 12.5-inch tablet (similar to the company's Inspiron Duo) with an edge-to-edge Gorilla Glass display, due in late 2012. 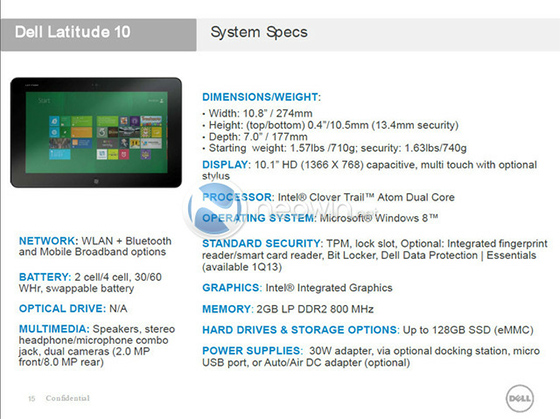 The second tablet, a Dell Latitude 10, looks to be a 10-inch tablet running on Intel's Clover Trail dual core Atom chip with up to 12 hour battery life thanks to a larger swappable battery. Although we can't confirm either tablet is real, the imagery appears to be based on some early Windows 8 Start Screen imagery — indicating that system specifications and design may have changed by now. Dell executive Steve Felice previously said he was "very encouraged" with the touch capabilities of Windows 8, but CEO Michael Dell believes touchscreen products "will certainly cost more" for consumers.

We're hoping to see some fresh Windows 8 hardware at Computex this year where Dell and others could potentially reveal their latest and greatest tablets and ultrabooks alongside Microsoft's Windows 8 Release Preview debut in the first week of June.