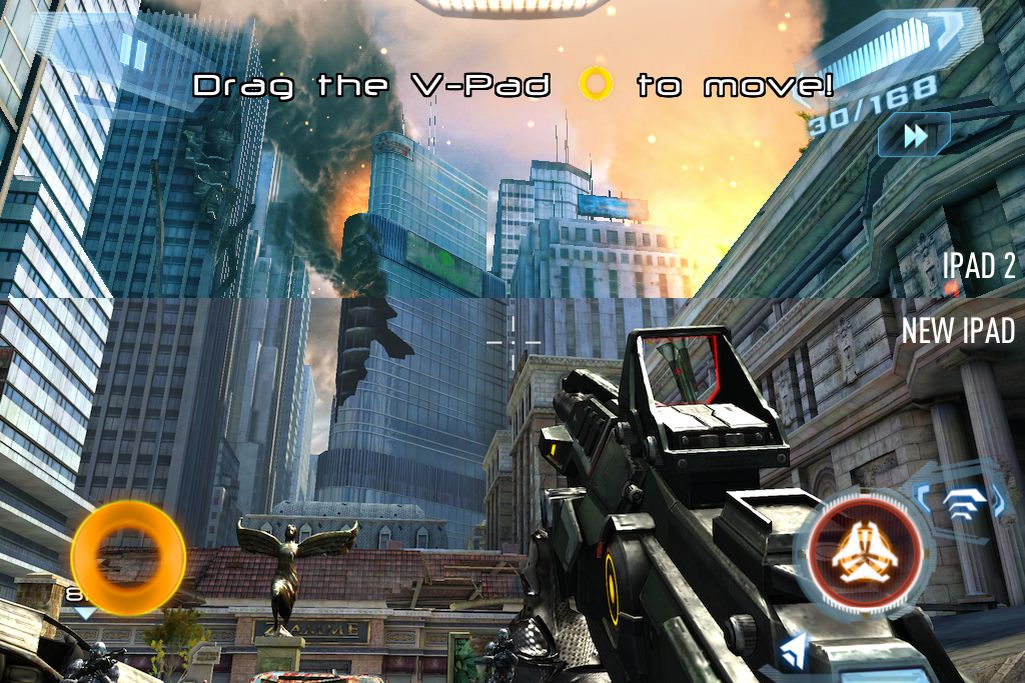 The new iPad's Retina display is certainly a sight to behold, but does it come at a cost? That's the impression you'd get from viewing screenshots of Gameloft's new shooter N.O.V.A. 3 over at NeoGAF — the results suggest that the developers have seriously dialed back the effects on Apple's latest tablet in order to push four times as many pixels. The A5X system-on-chip inside the new iPad is more than capable on paper, but what happens when its quad-core GPU is tasked with running a modern first-person shooter at 2048 x 1536? We took a look at N.O.V.A. 3 and some more of the iPad's most taxing games to see how this year's model stacks up to its predecessor.

Sticky TOC engaged! Do not remove this!
N.O.V.A. 3 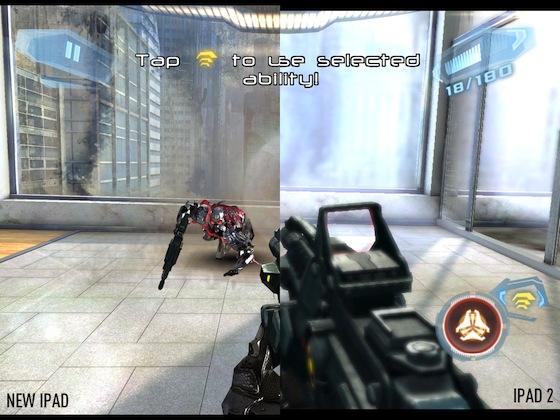 Gameloft's sci-fi shooter has seemingly morphed from a Halo homage to a Crysis clone in the span of two games, but you can't fault the technical nous on display here — N.O.V.A. 3 is a fairly stunning game whichever iPad you play it on, with visuals rivaling most of what we've seen on the PS Vita. Oddly, though, both versions will impress you in completely different ways. The game's detailed environments and assets look great on the Retina display, and if you didn't know any better you'd swear it was always meant to look like this. With an iPad 2 on hand, however, you'll quickly notice that certain sacrifices have been made in favor of resolution. The game is indeed much more effects-laden on the older tablet, with depth-of-field blurring and some particle effects such as burning buildings in the background completely removed on the new iPad. The iPad 2 also tends to handle the game at a steadier framerate.

However, it's actually debatable what these effects bring to the game on the iPad 2. While the detailed backgrounds and smoother framerate are a clear win, the depth-of-field effect isn't particularly impressive and often simply obscures what you're looking at. Meanwhile, the higher resolution of the new iPad lets you see further into the distance and cuts back on the ugly aliasing that afflicts the game on older hardware. It's also worth noting that the Retina display is just a flat-out superior screen to the panel in the iPad 2 — you'll get much better contrast levels and color reproduction on the new iPad, and that goes for all the games covered here. Overall we think it's a tossup as to which version is better, and if you're really after a sci-fi first-person shooter for your tablet it's unlikely to disappoint either way. 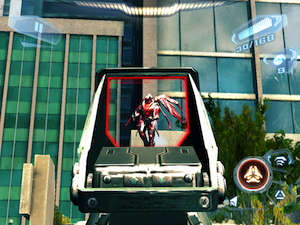 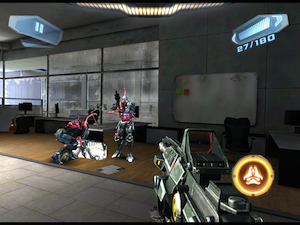 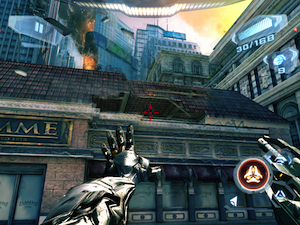 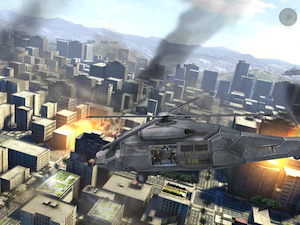 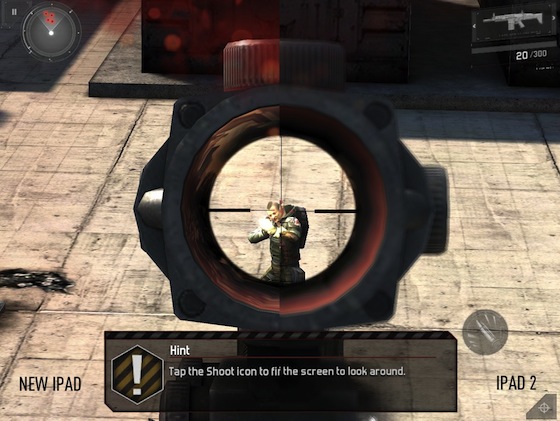 The obvious place to go after N.O.V.A. 3 is Modern Combat 3: Fallen Nation, a similar Gameloft first-person shooter that takes the Call of Duty series as its "inspiration." The titles share a lot in common, and that extends to the Retina display-enabled versions suffering many of the same problems. In Modern Combat 3's case the framerate is a lot less stable, and there are missing effects such as motion blur when you move your camera and a shallow depth of field when looking through your rifle's iron sights. These differences are subtler than what we saw in N.O.V.A. 3, but that actually works to the game's advantage — unless resolution is important to you, there's no question that Modern Combat 3 looks and runs better on the iPad 2. 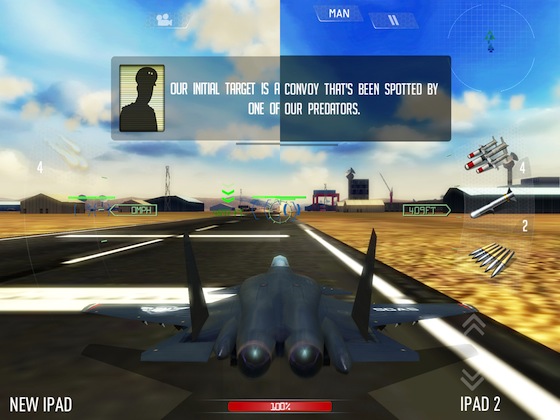 If there's one game you'd expect to show off the new iPad's power, it'd be Namco's Sky Gamblers: Air Supremacy — the arcade air combat title took center stage at the iPad's unveiling in March. Indeed, the new iPad doesn't have much of a problem keeping up with Air Supremacy, as it runs very smoothly at Retina resolution even in hectic dogfight scenes, but then compared with something like N.O.V.A. 3 it has far less work to do. The game looks essentially identical on the iPad 2 beyond the resolution difference, and while that does give the new iPad the edge you never get the sense that either tablet is being stretched particularly far. 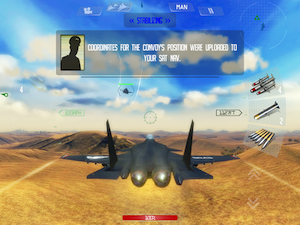 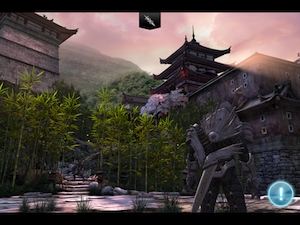 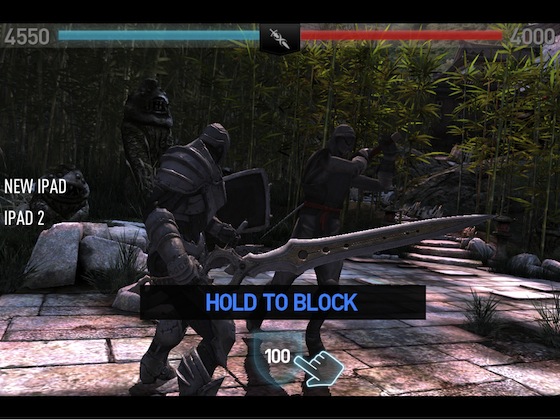 Epic Games' Unreal Engine-powered battler has been dismissed as a Punch-Out!! clone, a tech demo, or both in certain circles, but we're rather fond of it ourselves — and there's certainly no denying its visual impact. On the new iPad, however, that impact is somewhat diminished. While it does run at a higher resolution, it's not at the screen's native 2048 x 1536, which gives everything a slightly blurry feel. To make matters worse, the 2D assets such as on-screen buttons and menus remain decidedly low-res. The game does have more detail than its iPad 2 counterpart, but we're not sure we'd say it looks better — it feels more coherent on the older hardware, at least. Infinity Blade 2 is beautiful however you play it, but the slightly haphazard up-conversion draws attention to the new iPad's limitations. 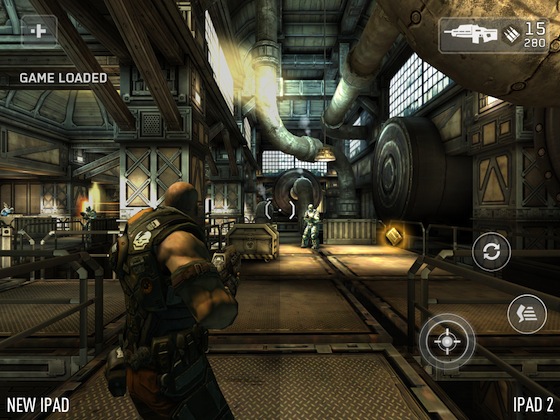 We often use Shadowgun as a rough performance benchmark in reviews, as the Unity-powered third-person shooter was one of the first games to put tablet graphics in the same conversation as modern console games. It still looks impressive today, and the iOS version hasn't made any sacrifices to run on the Retina display. it runs at full resolution without a hint of slowdown, giving the new iPad a clear win over the iPad 2. It doesn't go any further than that, though, which is a little disappointing considering the enhancements made to the game on Tegra 3-powered Android devices such as the Asus Transformer Prime. Had the new iPad run Shadowgun at full resolution with those extra effects and physics modeling, it would have been solid evidence for Apple's claim that the A5X is four times faster than Nvidia's chip — unfortunately that's a question that remains difficult to answer. 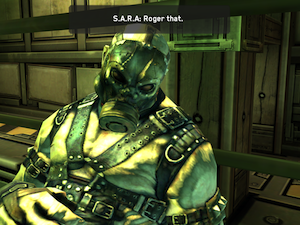 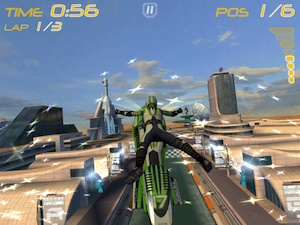 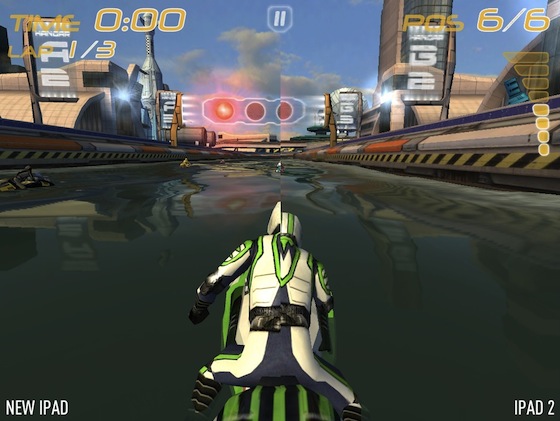 It's a similar situation with Riptide GP, a jet ski racer with Tegra 3 enhancements that don't show up on the new iPad. You do get a much sharper experience courtesy of the Retina display, and we noticed some extra background detail such as a launching spaceship that we never saw on the iPad 2, but Tegra 3-specific effects such as splashing water remain absent. The game also has a few more framerate hiccups on the new iPad, but it's nothing too serious and you actually have the option to drop the resolution should you value speed over sharpness. 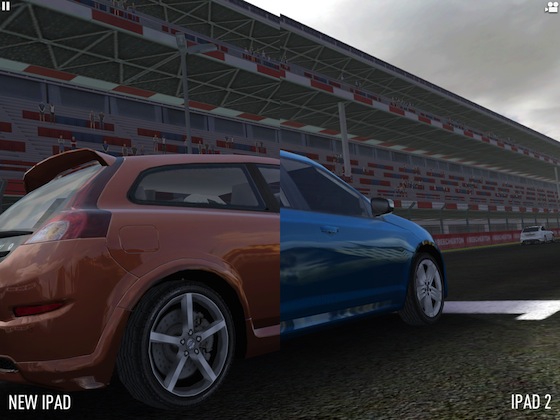 Firemint is often first out of the gate with updates to take advantage of new Apple hardware, and it's excelled itself on the new iPad. Real Racing 2 HD runs at full resolution and full speed with anti-aliasing and some extra detail on the car models, meaning that it easily bests the already-impressive iPad 2 version. It's a powerful demonstration of the new iPad's capability, and has us already looking forward to seeing Firemint's future work on the hardware. 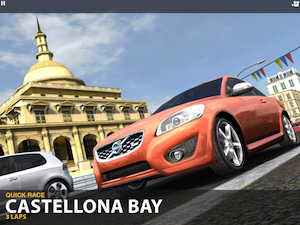 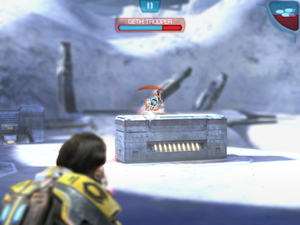 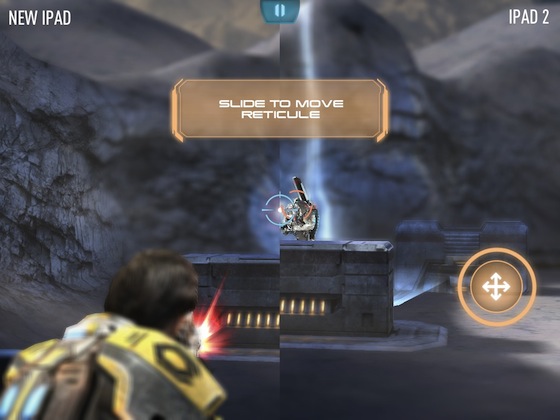 Like Infinity Blade 2, EA's Mass Effect spinoff can't quite manage the Retina display's full 2048 x 1536 output, instead operating at a sub-native resolution that actually isn't much more impressive than the game's implementation on iPad 2. We found the framerate slightly less stable, too, though it wasn't a huge difference. Thankfully, all the 2D assets seem to be fully Retina-ready even if the 3D action isn't, so the game does at least look visually consistent next to Infinity Blade 2. Given the choice we'd play on the new iPad, but it isn't a showstopping advertisement for the device.

In conclusion, it looks like N.O.V.A. 3 is somewhat of an outlier for having such dramatically different graphics on both iPads, and the newer tablet does manage to distinguish itself with some visually excellent titles. 2D games often look amazing on the new iPad, for instance, of which the likes of Waking Mars, Aquaria and Superbrothers: Sword and Sworcery EP are good examples. However, it's rare to see a technically demanding game run at Retina resolution without some compromises, and rarer still to see one equal or exceed the iPad 2's graphics performance at 2048 x 1536. The A5X and Retina display are both very impressive components, then, but it's clear that in gaming much of the former's capability is limited to supporting the demands of the latter.

Gameloft told CNET that a future update to N.O.V.A. 3 will give users the choice between running the game at full resolution or enabling the extra particle effects seen on the iPad 2, but going forward we'd like to see the A5X outshine its predecessor instead of simply matching it. What could it be capable of if developers used the quad-core graphics to push higher quality effects rather than churning out millions of extra pixels for the Retina display? After all, DVDs manage to look realistic enough at 480p. 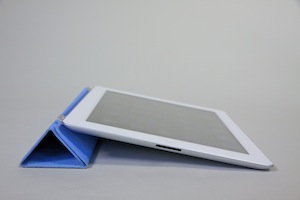