Futuristic 'Blade Runner' magazine covers get their turn in the spotlight

Fake magazine covers that appeared on a newsstand in Ridley Scott's "Blade Runner" have made their way online.

Share All sharing options for: Futuristic 'Blade Runner' magazine covers get their turn in the spotlight

The magazine covers you see above appear quite normal — if beautiful — at first, but it's only once you take a closer look that you see that there's something different about them. Much like an Easter egg in a video game, the makers of Blade Runner took the opportunity to have some fun when it came to populating the movie's fictional world of the future. Even the most devout fans who've watched Ridley Scott's masterpiece several times over (there are more versions of the movie than you can count on a hand) wouldn't recognize these magazine covers — as you can see below they hardly make an appearance on screen and are relegated to a newsstand of the future. As The Atlantic's Alexis Madrigal found through his own entertaining Google searches on the subject, the covers were first shared with the world in one of the film's bonus features, "Signs of the Times: Graphic Design," and were created by production illustrator Tom Southwell. With subtitles like "Earthlings Pay Big $ to see Future" teasing moviegoers who shelled out to see Blade Runner, we only wish we could see what lay beyond these covers. Maybe we'll get that chance if that Blade Runner sequel gets off the ground. 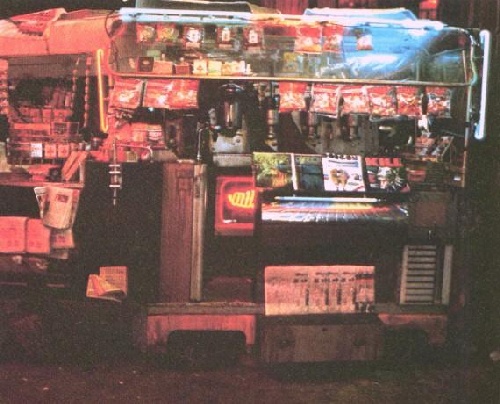