Inside the Iron Man armor with the HUD's designer

Share All sharing options for: Inside the Iron Man armor with the HUD's designer

When you’re piloting a suit of flying, super-powered armor, the idea of glanceable information takes on a whole new importance. 3D video effects designer Jayse Hansen takes us behind his work on Tony Stark's Mark VII HUD used in the Avengers movie, showing off a series of stills and screenshots of his designs, which also include the transparent touchscreen computers on board the Avengers' Helicarrier. In his designs for the film, the concentric ring design and its exploded pie pieces recur throughout, as does the color palette, with its heavy use of black and grey, along with muted reds, oranges, and blues. If you're wondering about Hansen's workflow, all of his work for the film was done in Illustrator, After Effects, and Cinema 4D, although the initial rough sketches (pictured below) were hand drawn in pencil. As far as research goes, the designer mentions he worked with an A–10 pilot on the flight menu, and it shows — the UIs are fantastic, but they never stray too far outside the possible. 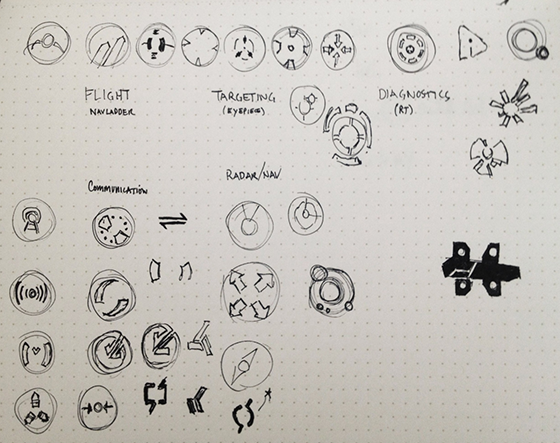