Ubi Interactive is working on a system that uses a projector in combination with a Kinect sensor to create a touchscreen that can be cast onto just about any surface.

Ubi Interactive (no relation to Ubisoft) is a startup from Munich currently working with Microsoft in Seattle as part of the Kinect Accelerator program. Their idea is a simple one that looks to be pretty effective — a system that uses a projector in combination with a Kinect sensor to create a virtual touchscreen that can be cast onto just about any surface. Ars Technica visited the team to test it all out and came away fairly glowing with praise, noting the system's responsiveness as well as the way it plugs directly into Windows and can use the bespoke touchscreen gestures.

It's not a totally new idea, as we've seen similar implementations such as OmniTouch, but Ubi's work has clearly impressed Redmond. The team sees it being used in offices, public displays, hospitals, and so on, and we can certainly see it working out cheaper than the cost of a TV-sized touchscreen — right now those seem to be the preserve of Steve Ballmer. 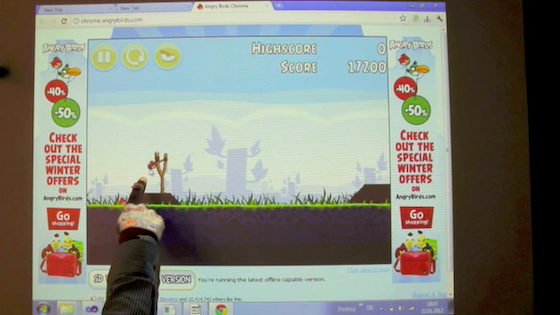