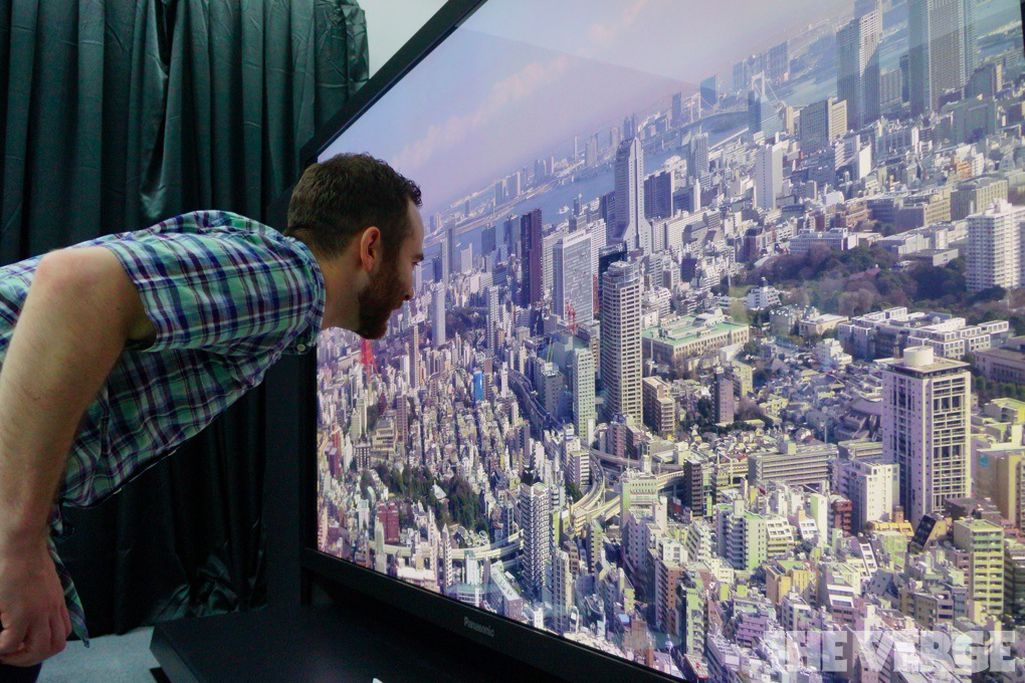 Nippon Housou Kyoukai, better known as NHK, is much more than Japan's public service broadcaster — it's a national institution that seeks to push forward major advances in televisual technology worldwide. This month the NHK Science & Technology Research Laboratories is exhibiting prototype examples of the innovations it expects to see in our living rooms in the 2020s, 30s, and beyond, ranging from impossible leaps in screen size and resolution to breathtaking breakthroughs in 3D imagery. It's a head-spinning display of the presently unattainable that leaves us decidedly unimpressed with our own 1080p 3D sets. Read on to find out exactly how you'll be watching TV in the future. 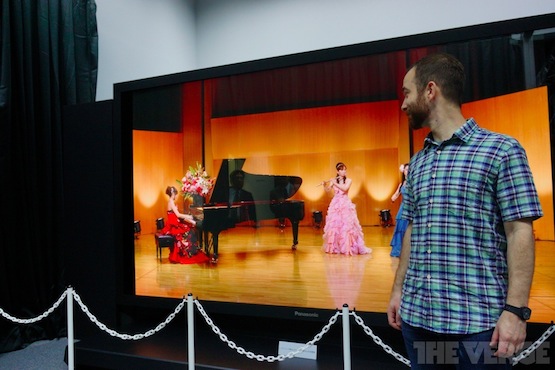 Also known as Ultra HDTV, 8K, or just plain 7680 x 4320, Super Hi-Vision is NHK's proposed future high-definition TV format. To give you an idea of what those names and numbers amount to, a "Full HD" 1080p picture would take up just a sixteenth of a Super Hi-Vision screen. Last month the broadcaster demonstrated the format running on the world's largest plasma TV, a 145-inch behemoth from Panasonic that would entirely cover many living room walls. Viewing Super Hi-Vision content on the screen is a surreal experience — any closer than six feet or so and it's almost too much information to take in. Like sitting in the front row at an IMAX movie, you constantly have to look around the display and actively watch for where the camera's focus lies.

Less disorientating are the 85-inch LCD panels from Sharp running at the same resolution and which produce a mesmerizingly beautiful picture from every position. 85 inches is a much more realistic proposition for home TV, and the limits of 1080p do start to become apparent at around that size.

If you're already satisfied with 1080p or the size of your set, though, there's still benefit to be found for you in Super Hi-Vision. NHK displayed a touchscreen interface that lets you remotely pinch, zoom, and pan around the picture — you can zoom into an 8K image up to 16x and still get the same clarity as 1080p. The demonstration featured a wide-angle shot of an ice rink, and it was possible to zoom in and track individual figure skaters as easily as finding a Starbucks on Google Maps.

Super Hi-Vision has been successfully broadcast at 184Mbps using a dual-channel terrestrial signal, and NHK also demonstrated an IP transmission system that employs eight hardware H.264 encoders for use at live events. This will be put to the test during this year's Olympic Games in London, with NHK and the BBC collaborating on public Super Hi-Vision screens to be set up in Japan, the UK, and the US. 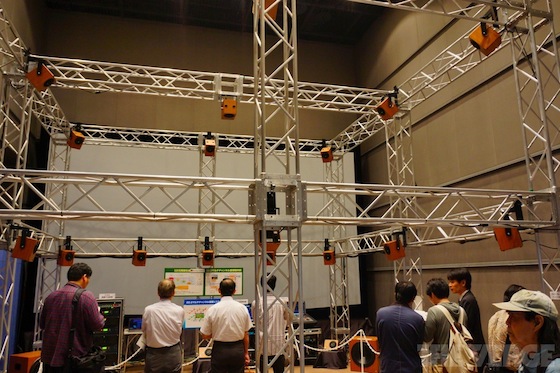 The format supports up to 22.2-channel surround audio, and NHK is working on ways to produce content complex enough to justify such a system. These range from a single-point microphone that can capture audio from 22 directions to a "reverberation device" that can control 3D sound. It's difficult to imagine significant uptake of 22.2 sound in the home, but it's pretty amazing to actually hear. 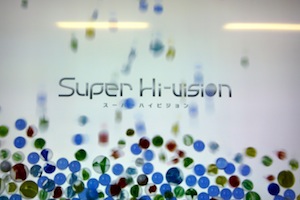 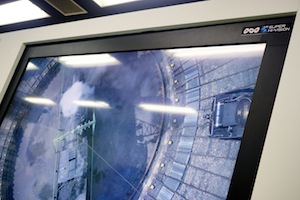 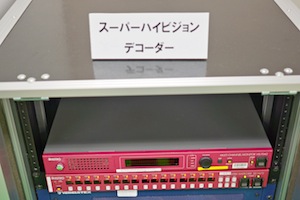 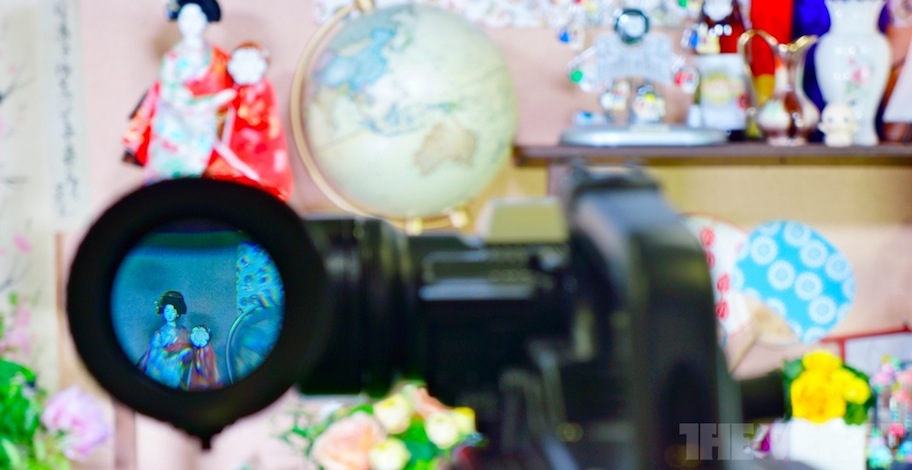 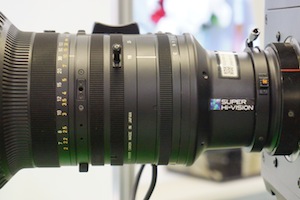 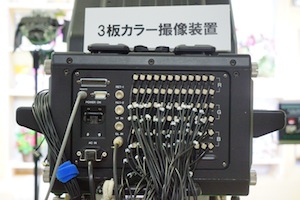 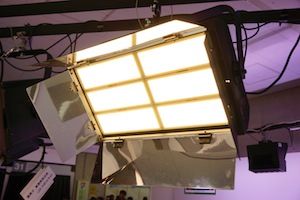 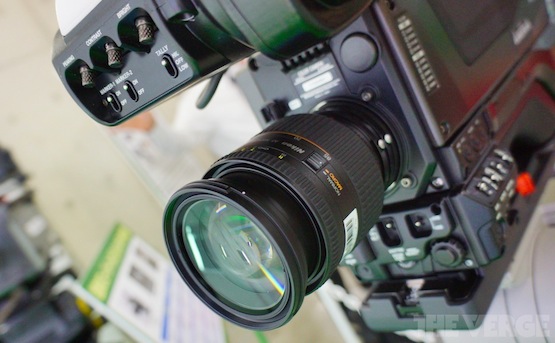 It’s all well and good to have an incredible new display technology, but without any 8K content you might as well not even bother turning on your 145-inch plasma. NHK has been working equally hard on new technologies to capture and create 8K footage, and it’s every bit as impressive as what we saw on the display side.

Existing 8K-capable cameras like Sony’s F65 are big, heavy rigs that need to be mounted on a tripod, somewhat limiting their usefulness. In order to give camera operators some more mobility, NHK is partnering with Hitachi to develop the world’s first shoulder-mounted 8K alternative. The current prototype contains a 33-megapixel sensor with a Bayer color filter array. Each pixel on the sensor records a single color, and an algorithm interpolates the complete set of RGB values. The camera uses interchangeable lenses (currently supporting Nikon’s SLR F-mount) with the intention of giving photographers a wide variety of commercially available glass to choose from. The idea is similar to Canon’s C500 or RED’s Scarlet-X, only with glorious 8K resolution. 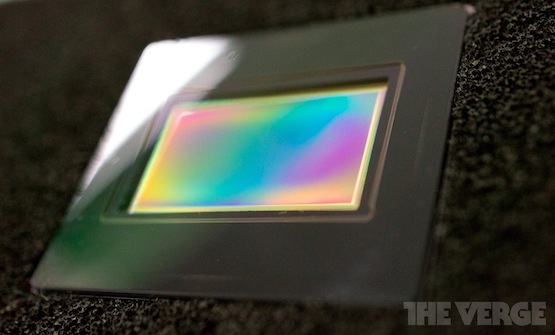 NHK is working on a 120fps 8K sensor with researchers at Shizuoka University, doubling the current maximum Super Hi-Vision frame rate. Since the sensor doesn’t use the Bayer array mentioned above, three of them are used together in order to capture the red, green, and blue channels. NHK has a working prototype camera doing just this, as well as a prototype 120Hz Super Hi-Vision projector developed in collaboration with JVC Kenwood. Even when displaying fast, frantic motion such as the cheerleaders' flags seen in the picture below, footage from the projector is impressively smooth and lifelike — an effect only enhanced by such sharp resolution. 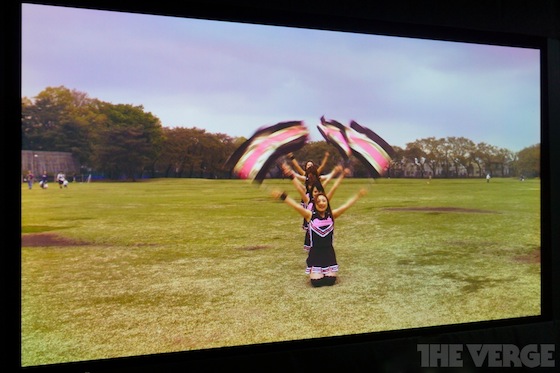 Given the advances it’s made in other fields, it’s only natural that NHK would want to bring studio lighting into the future as well. In an effort to move beyond inefficient halogen lights with colored filters or "gels," NHK is working on a four-color red-green-blue-white LED array for use in TV production. Not only is the new technology 96 percent more efficient, it gives lighting technicians the ability to produce hues from a huge color range simply by dialing the different LEDs up or down. The broadcaster is also working on an OLED floodlight that achieves the world's highest level of light emission efficiency and gives off a softer glow than traditional studio bulbs.

It's probably safe to say that 3D hasn't been the unqualified success TV manufacturers and movie executives were hoping for, with many finding the viewing experience distinctly underwhelming. While that's unlikely to change in the near future, NHK is researching alternative display technology that gives us some hope for the 3D dream, and it's all made possible by the resolution of Super Hi-Vision.

Integral 3D, in short, is one of the most astonishing display technologies we've ever seen, even in its presently embryonic state. Instead of stereoscopic screens that use shutter glasses to direct alternate images into each eye, NHK's integral display uses thousands of microlenses to reconstruct a spatial 3D image filmed from multiple angles — the upshot is that you're able to adjust your perspective on the subject based on your position. For example, in a demonstration video of a baseball game, we were able to see offscreen fielders simply by tilting our head a few inches to the side, and footage of a sumo bout allowed for greater comprehension of the wrestlers' grapples and movement. It solves the problem of viewing angles on traditional 3DTVs, and transforms the experience of watching TV into something more involved.

Right now, the main drawback is the resolution. NHK's current integral 3D prototype actually employs Super Hi-Vision technology, but that's because each effective onscreen pixel requires hundreds more to render the multiple perspectives. As such, the image currently appears very grainy even on a screen of around 30 inches. While this could eventually be solved by a finer array of microlenses, each lens would then require more pixels in order to add the appropriate depth perspective. For now, integral displays aren't much more than a tantalizing glimpse into the far-off future — NHK doesn't expect the technology to be commercialized until around 2030. 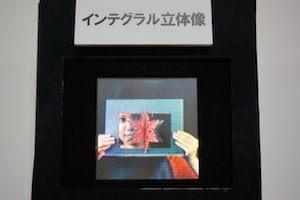 It's easy for someone with a 40-inch 1080p TV to question the value of a 145-inch 8K one, or deride the poor resolution of integral 3D. However, contentment with the state of television technology in 2012 shouldn't mean that we stop pushing forward, investing in new ideas, and challenging preconceptions about how we ought to experience TV. Super Hi-Vision isn't simply about the leap in detail afforded by a higher resolution — it's about what that resolution can be used for. The sheer size of Panasonic's plasma is an impressive show of muscle, to be sure, but elsewhere integral 3D shows early promise, and NHK's down-converting pinch-and-zoom touch interface demonstrates a worthwhile application even with today's display technology.

So, while you may not think you want a new set yet, you'd be on the opposite side of history to suggest that Super Hi-Vision is an exercise in excess. After all, that 1080p panel that you bought last year has its roots in a resolution first shown off in the US all the way back in 1981. The demonstrator? A Japanese broadcaster called NHK. Just last week we took a look at what the past expected from TV's future, and today we find ourselves in the same position.

Jeff Blagdon contributed to this report.