A night on the town with SceneTap

Amidst all the controversy, nobody bothered to ask the question: does SceneTap even work? I decided to test-drive the app on Wednesday night in San Francisco, and invite along someone who would have more use for this app than pretty much anybody else: Mike Smooth, professional pick-up artist, or PUA.

Share All sharing options for: A night on the town with SceneTap

SceneTap, the app that lets you see what bars are full, and what percentage of the patrons are female, had a PR meltdown when it tried to launch last week in San Francisco. There were the negative stories about its "creepy" face recognition technology. Threats of boycotts on bars that used it. Merchants backing away from the app in horror. And ultimately, a panicked-sounding statement from the Chicago-based company's CEO.

But amidst all the controversy, nobody bothered to ask the question: does SceneTap even work? I decided to test-drive the app on Wednesday night in San Francisco, and invite along someone who would have more use for this app than pretty much anybody else: Mike Smooth, professional pick-up artist, or PUA.

Smooth (he asked to go by his professional handle, rather than use his real last name) prefers to be called a "dating coach," and works for the LA-headquartered ABCs of Attraction. One of the many teach-dudes-to-score type educational ventures to spring from Neil Strauss' best selling 2005 book, The Game, ABCs specializes in helping short Asian guys score. Its founding guru is J.T. Tran, AKA The Asian Playboy.

Smooth was happy to help. He arrived at The Wreck Room, a college pub style bar in the city's Russian Hill neighborhood wearing a tasteful blazer, his black hair spiked with product. 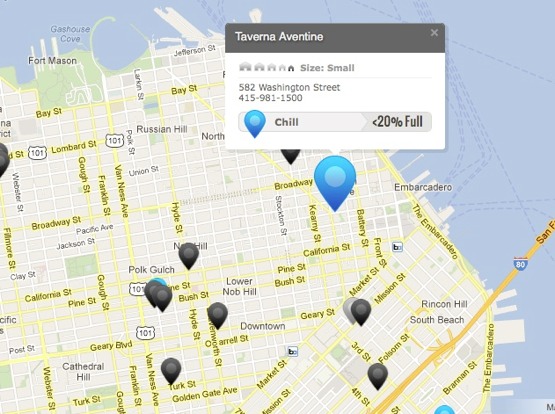 SceneTap broadcasts a bar's happeningness level via a color coded system of pins on a Google map, and when I arrived, The Wreck Room's pin was green, for "lively." Indeed it was: raucous shuffleboard, loud music, girls having a birthday party. Shortly after Mike Smooth arrived, however, it was inexplicably downgraded to a blue pin, or "chill."

"Probably cause I showed up," he quipped.

We spent a few minutes comparing notes: SceneTap said The Wreck Room was 35% women, average age 23, and 65% men, average age 32. Pretty accurate, though Smooth guessed the female percentage to be a notch higher.

According to SceneTap, the app makes these determinations via a camera positioned at the bar's front door. Facial recognition algorithms predict age and gender based on things like space between eyes, and then, says the company, the footage is instantly erased.

"When you're in a public place, there are cameras everywhere."

Smooth wasn't too concerned about privacy: "When you're in a public place, there are cameras everywhere," he said. He was more skeptical that the algorithms could know whether a chick was a chick. "This is, after all, San Francisco," he said. If they did, it would be a boon for ABCs bootcamps, which turn students loose in bars to practice approaching and charming groups, or "sets," of females. Instructors need to know where there is a high density of women, said Smooth, "because students crash and burn for a few sets before they get it." 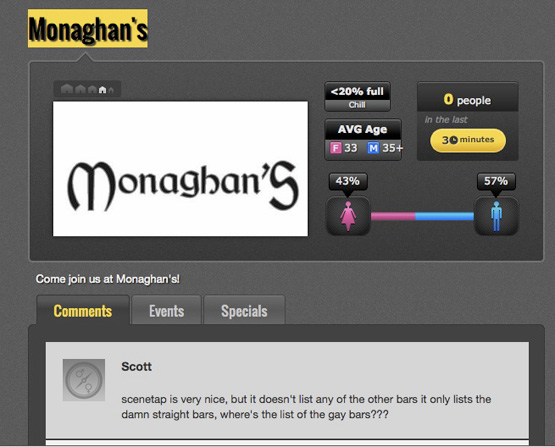 We decided to head downtown to the bar Taverna Aventine, which SceneTap had pinned yellow, for "hoppin.'" In the cab, we got pumped for what we anticipated would be a slightly drunken scene of finance types who had overstayed happy hour. The app indicated there were only 28% women, but more promisingly, that the bar was 73% full.

Smooth suggested we enter the bar very slowly, and see if our presence registered on SceneTap. It didn't

When we arrived, to our dismay, the bar was as dead as can be. Six people, total, one woman, "Come Together" blasting hopefully over the sound system. Smooth suggested we enter the bar very slowly, and see if our presence registered on SceneTap. It didn't.

We walked west, through the red light district of North Beach ("These door guys know exactly the right lines to use!" marveled Smooth. "They'll be like, 'Hey want a lap dance? What's the matter, are you gay?'") Our destination: Tope bar, yellow pin, "hoppin'". Somewhat fishily, the app had the exact same percentages as the last: 28% women, 73% full.

Amidst the stink of raw garbage and old cigarette smoke on the sidewalk, we observed sadly that this bar, too, was dead. Dumb ol' SceneTap. We didn't even bother to enter.

"9," Smooth said instantly. I counted, and sure enough, 9 exactly. "This is what I do," he shrugged, proudly. "When I first started out, my mentor, J.T. used to say I was real jittery," he said, demonstrating an earlier version of himself, surveying a bar with a series of furtive, desperate head jerks. "And then J.T. was like, 'Watch this.'" He swiveled his head in one velvety motion: "Smooth."

In the match between Algorithm and PUA, clearly Smooth was the victor. Which means privacy advocates have little to worry about with SceneTap. But aspiring Don Juans will have to wait for their ammunition against the professionals.

Lessley Anderson is a freelance writer who lives in San Francisco. She covers culture, tech, and beer.