As Facebook's stock price continues to slide, questions emerge about how low its shares can go.

Shares of Facebook fell 9.62 percent today, to $28.84, continuing the downward slide the company has been on since it went public two weeks ago at $38 a share. The steady decline has many investors wondering where the bottom is.

If Facebook traded at the same price-to-earnings ratio as its competitors for online advertising dollars — such as Google — the social network's stock would be worth somewhere between $16-20. Right now Facebook is trading at a P/E ratio of roughly 74 to 1. Google, by comparison, is trading at 18 to 1. Price-to-earnings is a guide, not an unbreakable principle. Amazon, for example, stands apart from its peers, trading at a phenomenal 174 to 1 ratio. But Amazon also has tremendous revenue growth that investors clearly believe will translate into big earnings down the line. 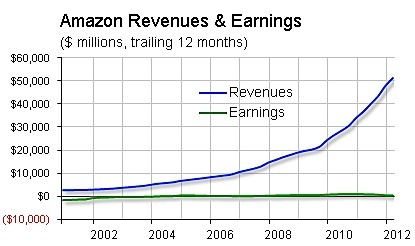 Facebook, to date, has built its business around online advertising. Not only is that business slowing, but Facebook's users are migrating to mobile, where it has no track record generating any meaningful revenue. Its acquisition of Instagram reflected that weakness, as do the rumored bids it has put on the mobile browser Opera and Face.com, which has built facial recognition for mobile photos.

Google has aggressively gone after mobile eyeballs by putting all of its weight behind Android, and more recently acquired Motorola Mobility, with rumors swirling that it will play a much larger role in the creation of hardware. This week the NY Times reported that Facebook too is rumored to be working on a mobile OS and smartphone.

The real concern for Facebook is not what the share price means to stock brokers, but rather to its employees. Brain drain is the most potent killer in Silicon Valley, where a company can go from cutting edge to over the hill in a decade or less (hello, Yahoo!). If share prices keep falling, staffers will have far less incentive to stick around after the six month lockup on employee stock expires — and that could be very bad for business indeed.