Bang & Olufsen has introduced it's "affordable" BeoPlay V1 HDTV as well as the wedge-shaped A3 iPad dock.

We'd heard rumors that high-end manufacturer Bang & Olufsen was prepping a new television, and today the company made things official with the introduction of the BeoPlay V1 HDTV. Available in both 32-inch and 40-inch models, the 1080p side-lit LED television features five HDMI inputs, a USB port for playing photos, movies, or music from an external source, and a slot behind the TV so you can tuck away your Apple TV out of sight. Created by designer Anders Hermansen, the television comes in either black or white, and allows owners to slide in one of five different fabric sleeves behind the front grill to give the display a splash of color. In a cool twist, a light sensor built into the front of the V1 dynamically adjusts the contrast of the picture based on the viewing conditions of the room. Both models will be available in the UK starting May 3rd, but while the V1 had been touted as a more "affordable" option, it's still going to set you back: the 32-inch model is priced at £1,999 (approximately $3,238), with the 40-inch model coming in at £2,499 (around $4,048).

The company has also introduced a new iPad audio dock, the BeoPlay A3. A wedge-shaped device designed to turn the iPad into a stand-alone movie or audio system, the A3 features three different 0.5-inch tweeters and a 2-inch woofer, and can actually sense which way the device is oriented, activating the appropriate array of speakers to provide accurate stereo sound no matter which way you have it turned. The A3 will provide five hours of playback per charge, though it will only charge the iPad when it is plugged directly into the wall. The A3 will be available in black starting May 21st for £449, though a white version is planned for later in the year. 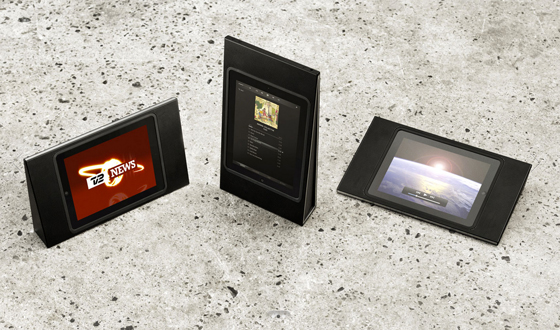