Google is showing off the performance of SPDY, a web protocol designed to make surfing the web faster, and has found a performance boost of 23 percent for mobile devices.

By JamieKeene May 3, 2012, 4:41am EDT
Source Google Developers and Google (SPDY for Mobile) | Via Engadget Mobile
37 comments / new

Google is looking to the future of the web and the optimization of the HTTP system that powers almost all of our browsing with the introduction of SPDY (pronounced "speedy"), a web protocol designed to make your webpages load even faster. To prove just how much quicker it is for mobile users, Google has created a test that pitches SPDY against basic HTTP on a Galaxy Nexus running Chrome for Android, loading 77 pages from multiple popular websites and comparing the load times when SPDY is enabled. In practice, it found that SPDY made sites load 23 percent faster on average.

SPDY's been in development since November 2009, and is already baked into a number of browsers including Firefox, Amazon Silk, and Google Chrome. It works via a combination of compression, multiplexing, and traffic prioritization to offer increased efficiency over regular HTTP. And while these performance improvements are impressive, SPDY's developers aren't finished yet — they say that they're working to optimize its performance over 3G and 4G networks even further. 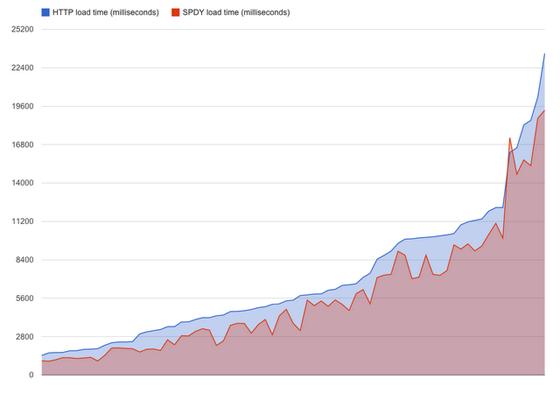