Samsung's flagship Android phone for 2012 has finally been revealed today, after months of speculation, expectation, and anticipation.

Samsung's flagship Android phone for 2012 has finally been revealed today, after months of speculation, expectation, and anticipation. Check out our very first hands-on photos and video with the Galaxy S III below.

While we can't comment on the plethora of new software features Samsung introduced today — among them the Siri-challenging S Voice — we can give you a decent idea of the look and feel of the device itself. Like the HTC One X, this is a supersized handset that doesn't feel like it. The 4.8-inch display doesn't overwhelm you, which is mostly down to Samsung melting down the bezel on its sides and minimizing what little there is above and below. The Galaxy S III also matches the One X for thinness, and since it has a quad-core processor, it matches it on the basic spec sheet as well (see our benchmark results below). The 8-megapixel camera on the new Samsung phone is integrated better than on the One X: it sits flush with the back of the phone instead of protruding from it.

Where Samsung falls behind its direct competitor is in the actual feel of the phone. Although the sides of the white Galaxy S III and the front of the dark blue version both sport a brushed metal look, they're made out of good old plastic. Alas, as much as we wished Samsung would move away from cheap-feeling (if sturdy) materials, the GS III is just keeping up with tradition. The glossy back is now more in keeping with the original Galaxy S than the textured finish on the Galaxy S II.

The main takeaway when you first pick up the Galaxy S III is that it's surprisingly light. It weighs over 130 grams, so it isn't that much of a featherweight, but the sensation of holding it is one of weightlessness. It almost feels hollow. We're not huge fans of this, we appreciate a bit more of a reassuring heft.

We had to look really closely to be certain, but sure enough, this is another Pentile AMOLED display from Samsung. The big rumor going into this event was that the Galaxy S III would be the first HD Super AMOLED display without Pentile spoiling things, but check out our macro shot below for some definitive confirmation (the signal strength indicator is supposed to be white). 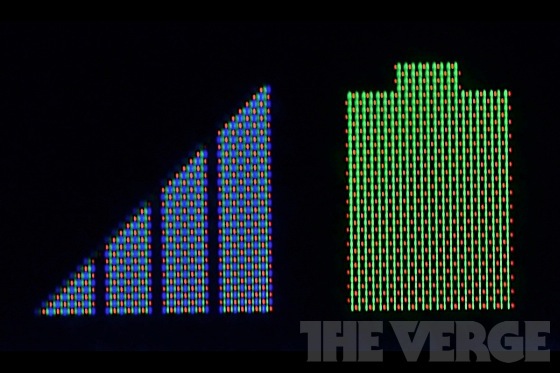 In a quick run of GLBenchmark (720p offscreen Egypt test) on the Galaxy S III, we obtained a highly impressive score of 99fps. For comparison, the One X and One S from HTC scored 65fps and 56fps, respectively. Quadrant gave us results of 5,266 and 5,265 on two runs (that result may have been limited by the 60fps frame cap), and Vellamo produced 2,056 on both runs. 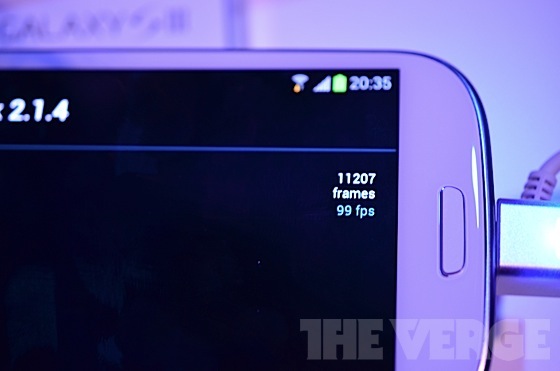