Nvidia's plated aluminum beast of a graphics card, the GeForce GTX 690, has landed on AnandTech's test bench today, the day of its official launch.

Share All sharing options for: GeForce GTX 690 reviewed: what's in a $999 graphics card?

Nvidia's plated aluminum beast of a graphics card, the GeForce GTX 690, has landed on AnandTech's test bench today, the day of its official launch. Combining two Kepler GK104 graphics processing units and 4GB of GDDR5 video RAM, this card is functionally identical to what you'd get if you ran two GTX 680 cards in SLI, with the key difference being that here they're both on the same board. Processing speeds have been gently reduced, in a concession to the power and thermal limits imposed by the single-card arrangement, but that turns out not to have a tangible impact on performance: the GTX 690 is a blisteringly fast card.

With the launch of its Kepler generation of graphics cards, marked by the introduction of the GTX 680, Nvidia moved to a new mode of operation where the clock speed of the card varies in accordance with load, utilization, and available power, deemphasizing the previously all-important stock clock speed. Basically, you're not just getting all the components of a pair of GTX 680 cards, you're getting all the performance too. That's handy for Nvidia, since the company has priced the GTX 690 at $999, which doubles the price of the 680 and makes this latest card the most expensive we've seen in the consumer market. 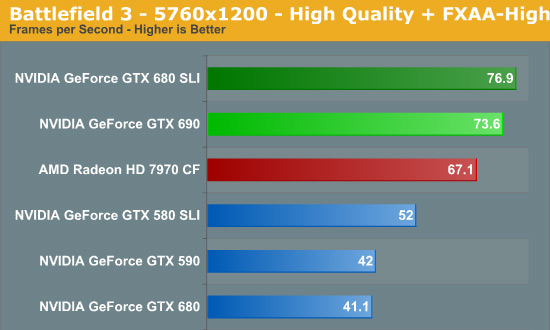 Part of the reason for Nvidia's aggressive pricing, reports AnandTech, has to do limited with limited supplies of the GK104 chip required for both of its latest-gen cards. The GTX 680 is hard to find on the market today, and since the GTX 690 places even higher demands on the chip, you can expect it to be extremely limited in its early supply as well. In the US, only EVGA and Asus will offer versions of Nvidia's new dual-GPU flagship.

Aside from producing the usual benchmark orgy required for a review like this, AnandTech answers the critical question about the GTX 690: why would anyone want to buy it instead of two cards if there's no price advantage? Well, firstly, this new card produces approximately 96 percent of the performance of the dual-card setup — a major feat of engineering when you look at the history of compromises that previous dual-GPU cards have exhibited — and secondly, it's quieter and consumes less power than the two cards. So, if you actually have a $1,000 budget for your PC's graphics and don't mind that negligible performance difference, the question might turn out to be, why not?