We gave Croppola a try, a new web service that promises to automatically crop your photos for perfect composition.

If your skill at taking pictures leaves something to be desired and the rule of thirds consistently evades you, new web app Croppola might be just what you're looking for. Developed by two computer vision researchers at École Polytechnique Fédérale de Lausanne (EPFL) in Switzerland, the site makes processing your photos simple. All you have to do is hit the "select files to upload" button, choose the final aspect ratio of the image you'd like (with choices for standard photos in 4:3 and 3:2, movies in 16:9 and 2.35:1, and even the ultra-wide 2.67:1 Facebook Timeline cover photo), and let it get to work.

We threw in a few snaps taken on a trip to London last month to try it out, and for the most part it works exactly as promised. It detects the dominant and most important objects in each photo, and crops to the aspect ratio you've selected at the top. However, it would occasionally be a little overzealous in the crop area and cut off the bottom of the image, and also sometimes chooses to focus on the sky rather than the foreground. It makes it really easy to adjust the suggested crops to your taste by simply dragging and resizing the marqueed area, though we'd occasionally find the page jumping to the bottom unexpectedly. Once you're done, your cropped photos can be downloaded as a zip file. 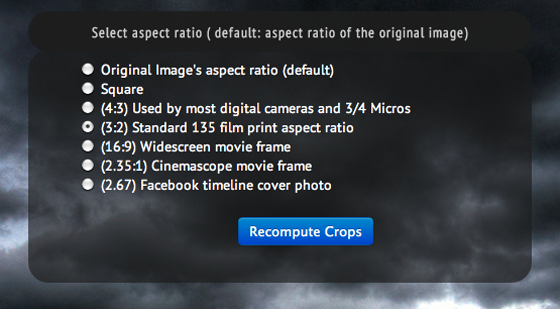 While it's highly likely that Croppola doesn't provide any extra functionality over the software that came with your camera, the auto-cropping and subject-detection is accurate enough to be useful to technophobes and unconfident photographers. It also has a user interface that's intuitive enough for anyone to use. Ultimately, it's a clever way to showcase the EPFL researchers work into computer vision. Check out the gallery below for a look at the interface, as well as Croppola's best guess at how our images should look.