Two days ago, RIM CEO Thorsten Heins unveiled the new BlackBerry 10 platform, but investors don't seem impressed: today, the BlackBerry manufacturer's stock hit an eight-year low of $11.91 on the Toronto Stock Exchange. Stock reached a high of $14.46 in anticipation of the BB10 reveal, but after Heins pulled out the BlackBerry 10 Dev Alpha handset and finished presenting his plans, the stock price has dropped like a staircase each day since.

It's not uncommon for stock prices to sink even after an positive announcement for a company — for instance, Apple's stock sank after the company revealed the iPhone 4S — but considering that this is the lowest the company's stock price has been since 2003, when the company's value was beginning to ramp after a serious decline, it's still worth noting. 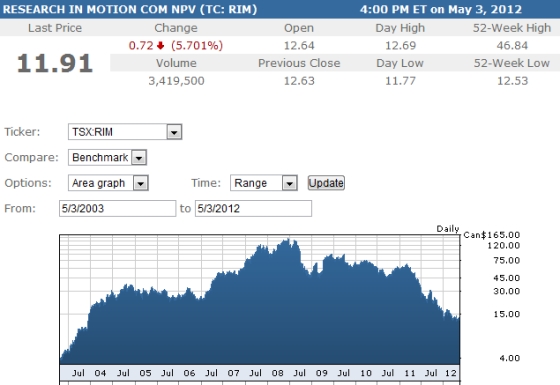