Track 8 is a music player for iPad based on Microsoft's Metro style UI.

Share All sharing options for: Track 8 is a Metro-style music player for your iPad (hands-on)

Apple's new iPad has been the subject of some pretty effusive praise, but the skeuomorphic design of apps like the music player isn't for everyone. On the other hand, while a lot of people love Microsoft's Metro style overhaul seen in Windows Phone and Windows 8, we're some months off seeing a truly workable tablet experience on the platform. The solution? Well, a new iPad app from Ender Labs called Track 8 might work for you, as long as playing music is your priority. The app is little more than a music player that's been unapologetically decked out in Windows 8's Metro UI, and if nothing else it's incredibly well-put together as a technical exercise. 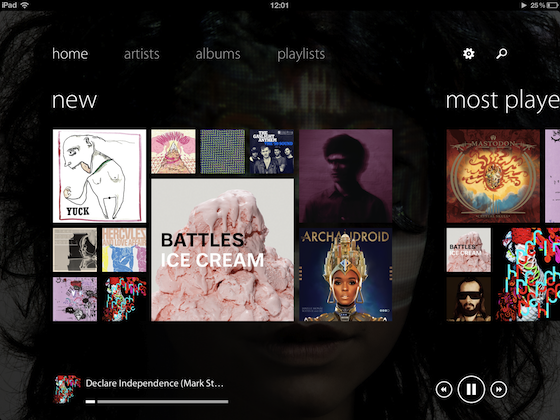 Track 8 hooks into your iPad's music library, including playlists, and organizes it in a landscape format interpretation of the Metro design language. It's not exactly the same — the font is a little different to Microsoft's version of Segoe, for example — but it is aesthetically pretty spot-on and most would be hard-pressed to tell the difference. The app is very smooth in operation, and looks great on the new iPad's Retina display. The best touch is the way it automatically pulls down images of the playing artist to use as background wallpaper, though beyond that you won't really find anything in the way of additional functionality over the standard iOS Music app. While it does reflect your created playlists, you aren't able to build one from within the app itself and will have to do so from Apple's Music app or iTunes.

As a work so brazenly in debt to someone else's, we're not quite sure who to recommend this to, but any iPad owners out there who are really in love with Microsoft's Metro style could certainly do worse. Track 8 will be released on Friday for $1.99.