Pioneer is attempting to make the dream of driving like RoboCop a reality this July with its Carrozzeria Cyber Navi heads-up display system. The HUD consists of a roof-mounted laser array that projects information onto a visor that clips above your windshield. Pioneer is showing off the technology in its Ginza showroom, and says it's been a big hit with passers-by — with a summer launch scheduled, we thought we'd take a look for ourselves.

The Cyber Navi system works with high-end Carrozzeria navigation units from last year and beyond. The basic advantage, besides sci-fi appeal, is that you check map data and other information without taking your eyes off the road. It's really easy to see the projected image (if a little difficult to capture on video), and while we're not sure how it'd perform in bright real-world conditions the lasers seemed to adjust to the on-screen images well enough without blocking much of the background. If you've ever used the hybrid viewfinder in Fujifilm's X100 and X-Pro1 cameras, it's not an entirely dissimilar effect. The transparent nature and fairly low resolution of the display mean it isn't really suited to displaying detailed mapping information or small text, but it could be useful for more general directions and orientations. 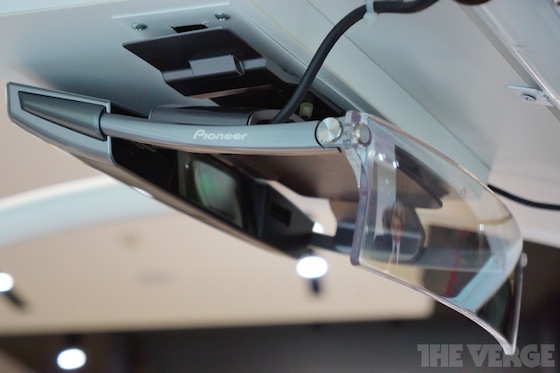 For now the system is only scheduled for a release in Japan, and only for Japanese cars at that. Pioneer says that foreign cars have different specifications and visor measurements, so you won't be physically able to attach the HUD. We like the way the technology works, but the difficulty of actually implementing it in vehicles is a fairly significant drawback. Still, it's no doubt food for thought for Google as the company ramps up Project Glass development — hopefully we'll see some equally robust turn-by-turn Maps integration.