Sony has just announced the Xperia Go, a 3.5-inch water-resistant Android 2.3 smartphone, which will be known as the Xperia Advance over in the United States. Joining it in earning IP67 certification is the Xperia Acro S, a 4.3-inch Android device with a 1280 x 720 display resolution and the same Android 2.3 operating system.

Sony has just announced the Xperia Go, a 3.5-inch water-resistant Android 2.3 smartphone, which will be known as the Xperia Advance over in the United States. It has earned IP67 certification for its dust and water resistance, whereas the other newly announced phone today, the Xperia Acro S, makes do with the lower standards of IP55 and IP57. Both should be able to withstand a splash of water, though.

The Xperia Go comes with a 1GHz dual-core processor, a scratch-resistant mineral glass display with "wet finger tracking" — a useful feature if you are actually going to rely on its advertised water resistance — and a 5-megapixel camera. Unusually for a Sony launch in Europe, the Xperia Go is already acknowledged as being a device destined for the US market as well, where it will be sold under the name Xperia Advance. 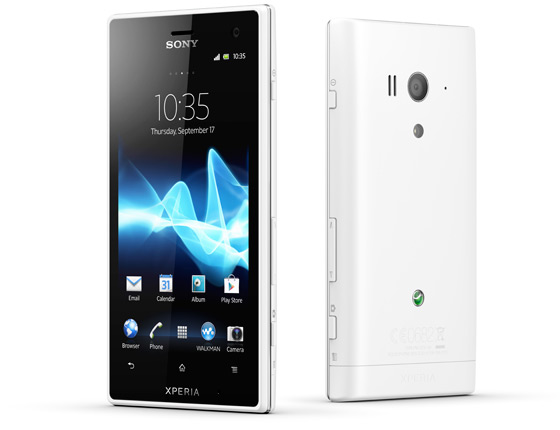 The 4.3-inch Xperia Acro S has a 1280 x 720 display resolution, but will actually launch with Android 4.0 Ice Cream Sandwich, unlike the Xperia Go. It'll also be PlayStation Certified. Looking at the rest of its specs, including the 1.5GHz dual-core processor and 12-megapixel camera around the back, it looks to be very much a direct match to the Acro HD model already introduced in Japan. Both the Xperia Go / Advance and the Xperia Acro S should ship globally in the third quarter of 2012, according to Sony, with an upgrade to Android 4.0 for the Go scheduled for some point later on.