Microsoft released the Windows 8 Release Preview today, and we got to spend some quality time with the new OS.

Two months after giving people a first taste of Windows 8 with the Consumer Preview, Microsoft's back with the latest step toward the release of the company's next operating system: the Windows 8 Release Preview. The new version was supposed to be released the first week in June, but Microsoft is apparently ahead of its development schedule — though that hasn't stopped the leaks from coming fast and furious. The Release Preview isn't nearly the upgrade the Consumer Preview was, but it's a clear move toward a stable, feature-complete operating system. We got to spend some time with the Release Preview on a Samsung Series 9 laptop, checking out the new features and trying to figure out whether Windows 8 will be equally well suited to touch and non-touch devices.

The basic look and feel of Windows 8 hasn't changed — even Aero is still present, though it'll be gone before RTM — but performance has definitely been improved. There weren't major problems with the Consumer Preview, but it now feels like things move a little smoother and a beat faster, especially as you flip between apps.

Multiple monitor support has been improved, too, and as we flipped through a few screens or disconnected and reconnected a tablet things worked perfectly and automatically. Apps can now be opened and closed on any monitor, and hot corners are extended to all your screens.

Flash is perhaps the most significant new feature in the Release Preview. Microsoft and Adobe worked together to build a stripped-down version of Flash for IE10, which adds some features (like video playback) while skipping over the pieces that typically cause performance and battery life problems. Microsoft is also maintaining a list of sites that are authorized to use Flash on Windows 8, so your experience will certainly vary — YouTube's allowed but Rdio currently isn't, for instance. (Full Flash is still available in Desktop mode.) 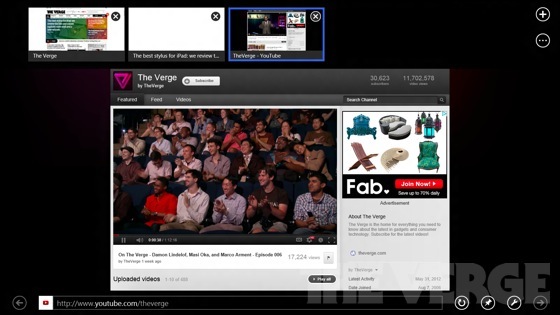 Flash has been crippled on purpose

From a hardware standpoint, we were curious to see how Windows 8 does on a device without touch capabilities. We'd primarily used the Consumer Preview on tablets, and spending some time using a mouse and keyboard showed us how much time Microsoft has spent making the OS work well with any input — there are keyboard shortcuts and hot corners everywhere you look. The company's also working with Synaptics and other companies on creating software drivers that add some of the Windows 8 gestures to a laptop's trackpad, so that if you swipe from the right on your trackpad it'll still bring up the Charms menu. Our device was running an alpha build of the drivers, and there were plenty of bugs and problems, but having the gestures available made it much easier to switch from a tablet to a laptop.

Teaching Windows 8 is going to be Microsoft's biggest challenge

The gestures can be hard to figure out, though, and using Windows 8 is a little clunky until you know them. So we asked Microsoft reps how the company would help new users figure out Windows 8, and the answer was essentially that they're working on it. Gabe Aul, a director of program management for Windows, said that the company's research and testing showed that within an hour, most people (intentionally or otherwise) figured out most of the gestures, and even those that didn't were able to navigate the OS without any trouble.

The other frustrating thing about Windows 8 is how often we're still forced to jump between the Metro interface and the standard Desktop look, because a setting or an app only ran in Desktop mode. The onus for solving that, of course, lies with developers, who will be called upon to build the Metro equivalents of everything from Notepad to Photoshop to Diablo III. The store expanded today alongside Release Preview, and we got to take a look at a few new apps ahead of time, like drink-making app Cocktail Flow, which gives you a database of beautiful and clever drink recipes. Wikipedia also built a Metro app, which is really beautiful and intuitive — you can also search Wikipedia from anywhere, which is pretty great. The full store just went live today, and there are plenty more Metro apps to wade through in Release Preview; all are currently free, too. 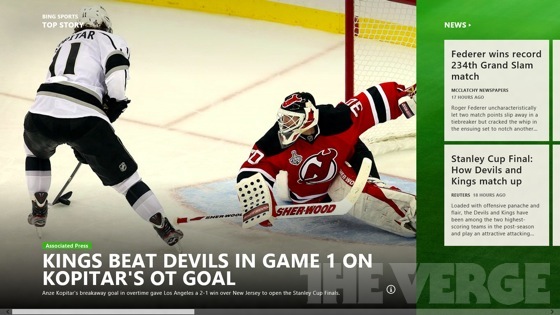 Metro apps get better and better

Microsoft's Bing team also created Sports, Travel, and News apps, Flipboard-like Metro apps that style text for your particular screen, offer big images, and make it easy to flip through a lot of content. The apps look great, with easy sorting by category, news source, or your favorite team. They're solid examples of how Metro apps should work and look, and should be good examples for developers to follow.

Most of the core apps haven't really been changed beyond some stability and reliability improvements. The Photos app has a new splash screen, with a big image and icons for your various albums — Windows 8 continues to be all about full-screen content. You can now pin a particular inbox, so you can get notifications for that particular account on the Start Screen. The People app has also been changed a bit, so you can now see a Facebook-style feed of what your friends are up to. 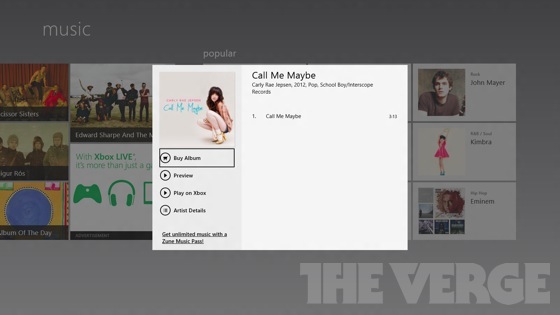 Zune Pass also now comes integrated into the Music app, which adds a nice subscription music service to the device — you get 30 days free when you first install Windows 8. Since Microsoft is clearly phasing out the Zune branding, we can't help but wonder if this is the Woodstock music service we'd heard about, but at least until E3 it remains a Zune device. You can play Zune music, along with videos or photos, on your Xbox through the Xbox Companion app, though the app's not installed by default on this version.

Windows 8 Release Preview feels very close to a finished product. Microsoft assured us that there are plenty of surprises left for the final, RTM version of the operating system, but even in its current state it feels like something you could install and use full-time. It's fast and stable, and with the store open has plenty of new apps for users to explore. There are still some kinks to work out — we don't ever want to be taken to Desktop unless we go there on purpose — but it's clear that Windows 8 isn't far from ready for prime time.