Despite being staunchly against the practice for years, Google has now adopted paid inclusion for certain types of search results.

Google has long been against paid inclusion, the practice of charging companies to be included in search results. As far back as 2001 the company said that it had no plans to adopt the practice, but it looks like over a decade later Google has changed its mind, at least for some results. Marketing Land reports that as of last month certain experimental Google search tools — including the flight and hotel search — have updated comparison boxes that now display "sponsored" results. These appear directly below the regular ads that show up at the top of a results page.

So what's the difference between a sponsored post and an actual ad? According to Google, in the case of ads, the advertiser has complete control over the content of the listing, but with sponsored listings Google itself decides how things are displayed. When you hover over the word "sponsored" in the search results, a disclaimer explains that "Google may be compensated by some of these providers." Google says that the change was made because certain kinds of search queries require paid relationships with data providers to turn up useful results.

As of now the sponsored results only show up when searching for hotels, flights, and financial products, and there's no indication that Google plans to adopt the practice for standard search queries. However, the news does indicate a dramatic change in one of the company's core values. In a letter written when Google filed its IPO in 2004, a section dubbed "Don't be evil" described the service's search results as "unbiased and objective" explaining that "we do not accept payment for them or for inclusion or more frequent updating." That no longer appears to be the case. 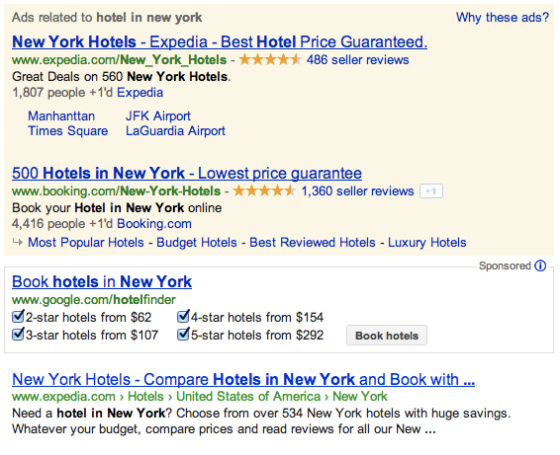