iPad drawing app Paper's update to version 1.023 isn't a huge overhaul, but comes with a couple of tweaks to improve both the creation and sharing of your pictures.

FiftyThree's excellent drawing app Paper just got a little bit better. The update to version 1.0.23 isn't a huge overhaul, but comes with a couple of tweaks to improve both the creation and sharing of your pictures. The first addition is the ability to export multi-page PDFs of your sketchbooks to other applications or email. This works much like the sharing functionality built into Android, giving you a simple list of compatible apps that can open PDF files — on our iPad, the feature worked with iBooks, Kindle, CloudReaders, and Dropbox. That last app in particular should make it a lot easier to show off your penmanship. Sharing individual pictures, however, remains limited to email, various social networks, and saving to your camera roll. 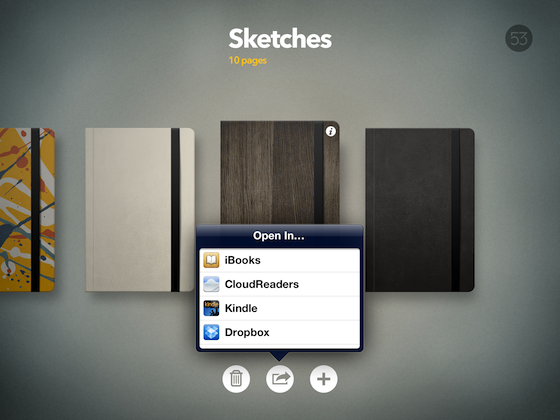 The update's other main feature is an extension of the Rewind undo feature where you swipe with two fingers in an anti-clockwise circle to remove unwanted strokes. Previously this only worked with the last 20 lines drawn, but that's now been extended significantly — we're not sure exactly how much by, but we were able to erase a 50-stroke picture completely. Any more than that and you're probably better off using the eraser function, as the gesture gets pretty tiring after a while. The update is available now in the App Store, and the app is free with in-app purchases for various drawing implements.