BMW, Ford, GM, and others agree on new fast-charging standard for EVs

The majority of Western auto manufacturers are debuting a new AC / DC fast-charging standard this weekend which will recharge compatible electric vehicles in around 15-20 minutes.

Share All sharing options for: BMW, Ford, GM, and others agree on new fast-charging standard for EVs

A number of automakers are debuting a new fast-charging standard this weekend which will recharge compatible electric vehicles in around 15-20 minutes. Audi, BMW, Chysler, Daimler, Ford, General Motors, Porsche, and Volkswagen have agreed upon a single design for use in Europe and the United States. Designed by SAE International, the new port is an evolution of the AC-based J1772 port (also from SAE) found in the Ford Focus Electric, Nissan Leaf, Chevrolet Volt, and Tesla Roadster, among others, but also allows for charging over DC. The new AC / DC port will be compatible with the existing J1772 infrastructure, but the plan is to introduce ultra-fast DC charging at public stations on both sides of the Atlantic.

Absent from the coalition of the willing are Toyota, Nissan, Honda, and the rest of the Asian automotive industry, who are already using a DC-based standard known as CHAdeMO. That said, there's little-to-no chance that any of the Asian companies would release a car in the US or Europe that wasn't compatible with the most popular charging solution in the territories, so it isn't something that you should worry about. The J1772 'combo connector' ports will start appearing on vehicles from next year, and the ACEA (European association of vehicle manufacturers) has selected the interface for all new cars in Europe from 2017. 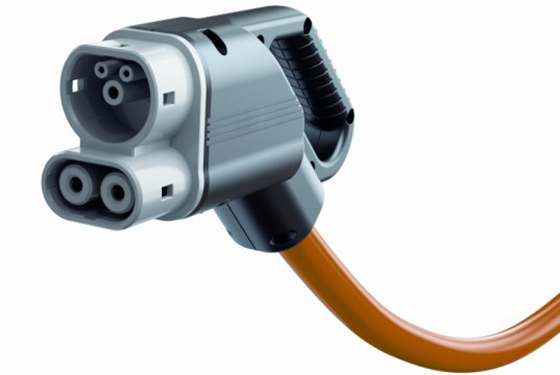