Is Metanota the 'perfect Mac app' for Simplenote?

Metanota is an alternative to Notational Velocity, a popular Mac OS X Simplenote client. But how does it compare?

Share All sharing options for: Is Metanota the 'perfect Mac app' for Simplenote?

If you read our recent The Verge at work feature, you'll know that many of us use Notational Velocity as an OS X desktop client for the text-syncing service Simplenote. There's now a new contender in town though — named Metanota, it boasts that it's "the almost perfect Mac app to manage your cloud notes." (Well, nothing’s perfect, right?) But does it live up to this lofty claim? We gave it a try.

The app itself is clean and intuitive, prompting you to enter your Simplenote credentials as soon as you open it. From there all of your notes are imported from your account, with a three column view letting you sort by labels, pick the note you want to work on, and then edit it on the right pane. The free version is ad-supported, though we didn't find the ads too distracting, and Lion users are able to remove them through an in-app purchase. While only Simplenote is supported for now, Metanota promises that other services like iCloud, Evernote, Gmail, and Dropbox will be added shortly. There's also really simple searching — just hit the spyglass at the bottom of the notes column and enter your search term. 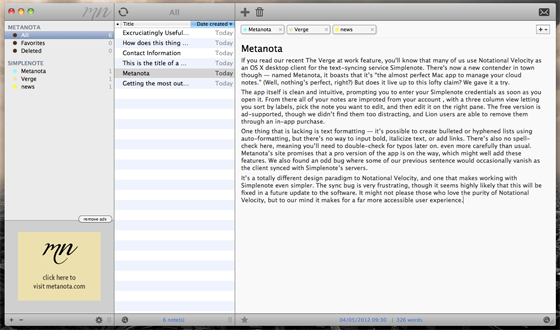 One downside is Metanota's meagre text formatting — it’s possible to create bulleted or hyphened lists using auto-formatting, but there’s no way to add bold type, italicize text, or add links. There’s also no spell-check here, meaning you’ll need to double-check for typos even more carefully than usual. (Update: spell-check options are available as a right-click option in the text editor.) Metanota’s site promises that a pro version of the app is on the way, which might well add these features. We also found an odd bug where a portion of our previous sentence would occasionally vanish as the client synced with Simplenote’s servers.

It’s a totally different design paradigm to Notational Velocity's "nonconformist" structure, and one that makes working with Simplenote even simpler. The sync bug is very frustrating, though, and can sour the overall experience as you're forced to retype text elements that suddenly vanish. The lack of integration with other services also feels limiting — while Simplenote synchronization works fine, the lack of support for far more popular storage services like Dropbox in the current version is a little disappointing. The look might not please those who love the purity of Notational Velocity, but to our mind it could make for a far more accessible user experience — if only the bugs were squashed.