Apple and Samsung scoop up 99 percent of handset profits

Apple and Samsung together have earned 99 percent of all the profits in the mobile phone industry, according to Asymco. HTC is the only other major handset maker earning a profit, only 1 percent of the total.

Share All sharing options for: Apple and Samsung scoop up 99 percent of handset profits

Who’s making money selling mobile phones in 2012? Three companies: Apple, Samsung, and HTC; with Apple and Samsung combining to take 99 percent of industry profits, according to Horace Dediu at Asymco. What’s more, Apple alone netted 73 cents out of every dollar earned by phone makers. While that may sound hard to believe, keep in mind that Motorola, Nokia, Sony (Ericsson), LG, and RIM have all been making negative money. 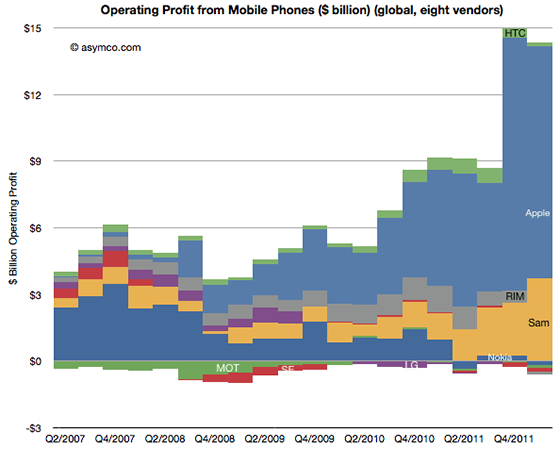 In case you’re worried the top image gives the impression that the mobile industry hasn’t been growing, rest assured that it has. In the graph above, Asymco shows that industry profits have been rising rapidly — from $5.3 billion in Q1, 2010 to $14.4 billion in Q1, 2012. The major reason, Dediu posits, is the huge number of carrier subsidies for the iPhone 4S. Apple's phone profits are even more dramatic when you realize it's been getting a bigger and bigger share, while the size of the pie has swelled to more than quadruple what it was in 2007. Take a look below to see how handset vendors' profits have changed over time, and if you'd like to visualize the data differently, Asymco has made it available on Google Docs.