Steven Troughton-Smith examines a May 2007 build of Android, one of the earliest versions of the OS, on a prototype Google Sooner phone.

Share All sharing options for: See one of Google's first Android builds on the 2007 Sooner phone (update)

Before the iPhone made touchscreens nearly mandatory for smartphones, Google was designing its own phone and OS, neither of which bore much resemblance to the Android platform we know today. Developer Steven Troughton-Smith says he's gotten his hands on the first Android reference device, the Google Sooner, running a build of Android from May 15th, 2007. On his blog, he's taken a detailed look at this early version of the OS, including high-resolution screenshots and commentary. 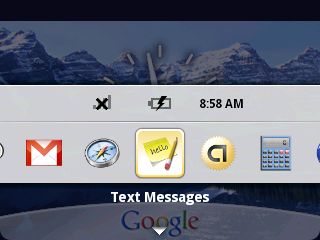 Besides the lack of touch, there are a number of other differences. There's no home screen as we know it, only a large clock and a pop-up Google search bar. The more familiar version of the screen (which would be shown off on the later M3 build of Android) is there, but it actually launches as a separate app, and the apps menu is built for keyboard navigation. As Troughton-Smith says, it's "quite clear that Android was being designed to a completely different target before the iPhone was released. What we see here would have fitted in perfectly with the world of Symbian and BlackBerry." There's plenty more over at his blog, all well worth a read.

Update: Diane Hackthorn, an employee of Google's Android engineering group, has posted a comment on OSNews in response to Steven Troughton-Smith's post saying that his impressions are "a little misleading." Hackthorn says she joined the Android team in 2006, and explains that the Dream (also known as the T-Mobile G1) and the Sooner "were basically the same." Hackthorn says they merely look different on the face because the UI on the Sooner was optimized for non-touch input, but that the underlying code is the same version of Android. Additionally, she says "I don't recall the exact dates, but I believe the decision to drop Sooner was well before the iPhone announcement."