Slides leaked by a CrackBerry Forums member supposedly show off a number of innovative new features coming to BlackBerry 10.

Last week RIM CEO Thorsten Heins was getting excited about the new BlackBerry 10 interface, keyboard, and camera app at the BlackBerry World keynote. However, some slides leaked by CrackBerry Forums member biggulpseh hint at a number of other features still to be announced. The most notable is the OS's screen sharing ability, which allows you to show someone your screen during video chat, deliver presentations while on the move, or share anything else from your phone wherever you are. It's a feature that we take for granted on our PCs, but not something that's made it widely to mobile devices. 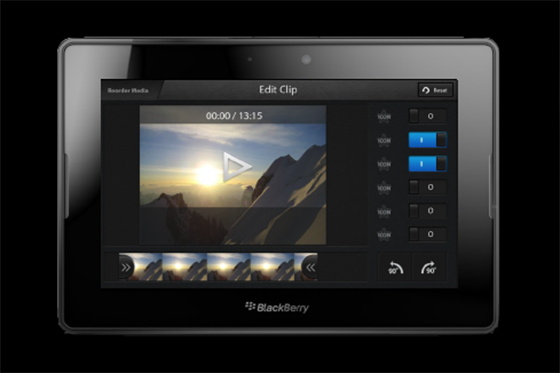 Other features shown in the presentation include a notifications system that gradually reveals more information as the phone is picked up, a stylish new clock, intelligent lock screen, and integration with Facebook and Twitter. There's also a video editor (shown for the PlayBook above) that's supposedly been developed by the Jaycut team, which was acquired by RIM in July last year. biggulpseh also says that the BlackBerry London is still set to be the first handset to market, possibly under the Colt 2 name, though as with the rest of the information here anything could change prior to the launch of BlackBerry 10 later this year.