Smartphone owners now a majority of US mobile market, a multicultural feast for advertisers

Smartphone owners now a majority of US mobile market, a multicultural feast for advertisers

It's a sampling, not a census. Still, it's as solid a picture as we're likely to get of what Nielsen calls "the new US smartphone majority."

Smartphone owners are now the majority of the US mobile market. According to a new report from Nielsen, the US passed the tipping point in March, with 50.4 percent of mobile subscribers now sporting a smartphone. This is up from just under 50 percent in February and 37 percent from March 2011.

Yep — this is a smartphone country. And that affects how, when, and where we work, shop, and play.

Nielsen's figures confirm a Pew survey in March that also showed a slim smartphone majority. Another report from research firm Canalys shows smartphone shipments outstripped those of computers and tablets combined in 2011.

Why does this data matter? Advertising. As the addressable market has shifted from TVs and radios to computers, tablets, and smartphones, Nielsen has shifted with it, selling its reports to carrier networks and advertisers. These companies want to know not just which OS is winning hearts and minds of mobile customers, but who those customers are and how they use their phones.

Why does this data matter? Advertising

Nielsen has also been tracking smartphone users' demographics. It's probably no surprise that the young and the wealthy are substantially more likely to own smartphones. Nielsen also reports that among mobile users, women are slightly more likely to own smartphones than men (50.9 percent vs. 50.1 percent), Asian-Americans are the ethnic group with the highest smartphone penetration (67.3 percent), with Hispanic- and African-Americans at 57.3 percent and 54.4 percent respectively.

For this report, Nielsen surveyed about 70,000 mobile subscribers over the first three months of 2012. The survey was primarily online, although a Nielsen representative says this was blended with a Spanish-language phone survey to get a more accurate accounting of those users. 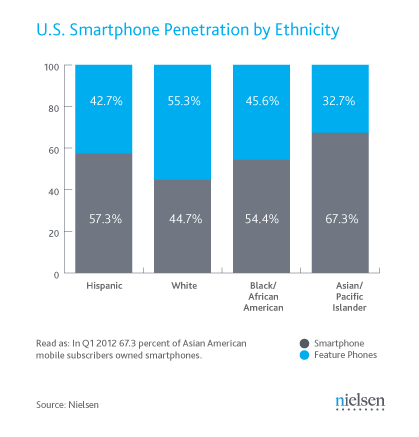 The survey only includes postpaid mobile subscribers, so the substantial prepaid mobile market isn't captured here. And all of the information, from OS to ethnicity to income, is obviously self-reported. This might also explain what seems on its face like an unusually high percentage of Windows Mobile users: survey respondents may not have been able to clearly distinguish between the older Windows Mobile OS and the new Windows Phone.

It's a sampling, not a census. Still, it's as solid a picture as we're likely to get of what Nielsen calls "the new US smartphone majority."