After taking the weekend to think things over, the jury in the Oracle vs. Google trial has officially arrived at the same conclusion it floated Friday: it is deadlocked on one of the four questions it needs to answer in the copyright phase of the trial, but not before finding Google guilty of infringement in its partial verdict.

The jury in the Oracle vs. Google trial found Google liable of infringing Oracle's Java-related copyrights today, although it remained deadlocked on the critical issue of whether Google made fair use of the Java APIs. The fair use question has been unresolved since Friday, when the jury told Judge William Alsup that it couldn't reach a unanimous decision on the matter. The judge had instructed the jurors at that point to think things through over the weekend in the hopes that they could avoid turning in just a partial verdict, but to no avail. Here's a full breakdown of the questions presented to the jury and the answers they returned: 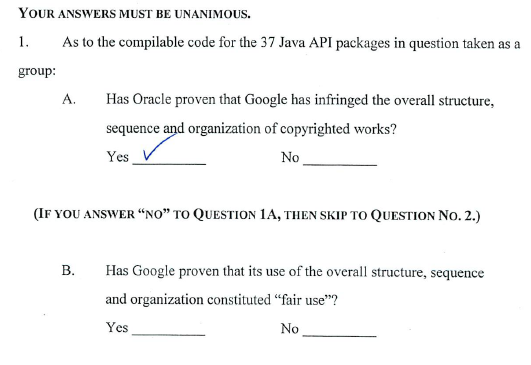 A major "undecided" for 1B.

The jury found that Google had infringed upon Oracle's copyrights by its use of the structure, sequence, and organization (SSO) of the 37 Java APIs utilized in Android. Whether Google's use was covered under fair use — and therefore permissible — was the question they could not agree upon. That's the single most important infringement accusation in the case, and the judge will have to find a way to deal with the jury's inability to decide the fair use question. Judge Alsup also has to decide if the SSO of the Java APIs is actually copyrightable as a matter of law — he instructed the jury to proceed as though it is, but that remains an open question of significant importance. If Judge Alsup decides the SSO is not copyrightable, these questions won't matter in the first place. 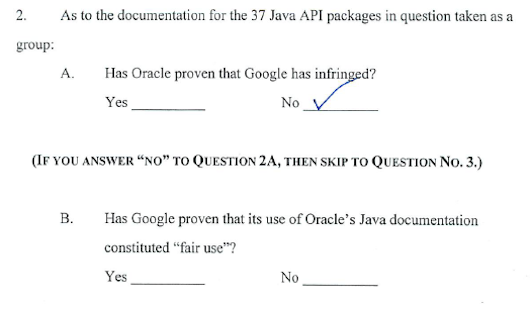 The issue of SSO is just one part of the story, however. The jury was asked to address four different questions in total, including whether Google had unfairly taken from the documentation associated with the 37 Java APIs. They found that Google had not infringed Oracle documentation copyrights. 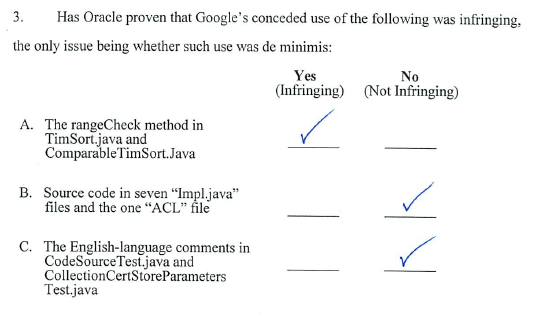 The literal copying of code and comments in some files — best exemplified by the nine lines of rangeCheck code found in TimSort.java and ComparableTimSort.java — was a charge that Google had already conceded. The question for the jury was whether the copying was in fact de minimis: too small to constitute any actionable infringement. Of the three subsets that the jury was asked to deliberate on, they found that Google had infringed with only one of the three: the rangeCheck code itself. 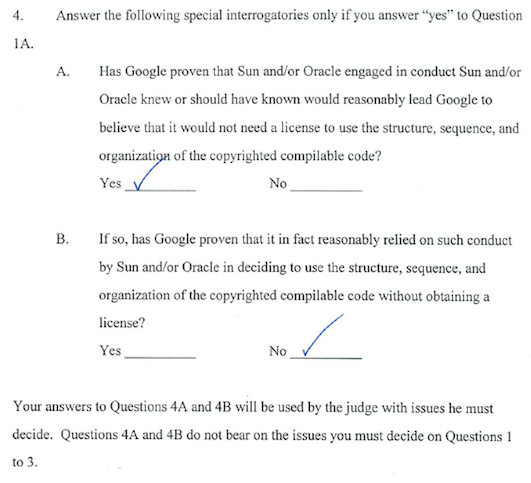 A large portion of the testimony the past two weeks has been devoted to whether Sun had provided sufficient indications — in public or private — for Google to reasonably assume that its adoption of the SSO was acceptable. This was hotly contested; things were so turned around that Google called former Sun CEO Jonathan Schwartz to the witness stand last week as the keystone to this portion of its defense. While the jury found that Sun's actions could have led Google to believe it didn't need a license, it decided that Google knew better back in Android's early days and didn't actually rely on Sun's representations. Several internal emails from Tim Lindholm, Andy Rubin, and Eric Schmidt talking about the need to license Java no doubt played a large part in the latter decision. However, this particular question was only provided to the jury to help guide the court's decision on the issue. Judge Alsup will ultimately make that call.

Google immediately moved for a mistrial given the results, and will be preparing a brief making its argument. On the issue of damages, Oracle counsel David Boies stated that Oracle should be owed a portion of Android profits given the rangeCheck infringement, a pivot from earlier statements that it was expecting just statutory damages for this portion of its accusations. Judge Alsup disregarded this almost immediately, stating that there should be just one line of statutory damages going to the jury, which would result in a much smaller number than Oracle had hoped to achieve with its legal action.

Without missing a beat, the trial has quickly shifted to the patent portion of the proceedings, but the mistrial motion isn't the only unresolved issue left over from the copyright phase. While the jury was instructed to proceed as if the SSO of the Java APIs were copyrightable, that question is still up for debate. A ruling from Judge Alsup that they are not would render the jury's verdict on the SSO infringement entirely irrelevant. Both Oracle's and Google's legal teams are preparing briefs on the question for submission to Judge Alsup by May 10th. Both sides will be submitting responses to the others' briefs on May 14th, with the judge making his decision at some point thereafter.

As for Oracle and Google, both companies have issued official statements in response to the day's events. We've included both in their entirety below.

We appreciate the jury's efforts, and know that fair use and infringement are two sides of the same coin. The core issue is whether the APIs here are copyrightable, and that's for the court to decide. We expect to prevail on this issue and Oracle's other claims.

Oracle, the nine million Java developers, and the entire Java community thank the jury for their verdict in this phase of the case. The overwhelming evidence demonstrated that Google knew it needed a license and that its unauthorized fork of Java in Android shattered Java's central write once run anywhere principle. Every major commercial enterprise -- except Google -- has a license for Java and maintains compatibility to run across all computing platforms.

Matt Macari and Nilay Patel contributed to this report.