As of this month HTC will have refreshed its lineup for each of the four major US carriers, and we're helping you sort through the options.

As of this month HTC will have refreshed its lineup for each of the four major US carriers: AT&T is now selling the One X LTE, its 4G LTE version of the global One X model, while Sprint has a slightly more custom version with the Evo 4G LTE. Not to be left out, T-Mobile is offering the One S — an ultra-thin aluminum-clad smartphone that uses a 4.3-inch Super AMOLED PenTile display and the same 1.5GHz Snapdragon S4 processor as the Evo 4G LTE and One X LTE. As for Verizon, it just announced that it's readying the launch of the Droid Incredible 4G LTE, a much different take on the One line with a 4-inch qHD LCD display and a slightly slower 1.2GHz S4 inside.

That's a solid choice on every carrier — so if you're agnostic to the name on your bill, let us help you break down the devices with this handy product comparison.

Compare this: Droid Incredible 4G LTE vs. EVO 4G LTE vs. One S vs. One X LTE 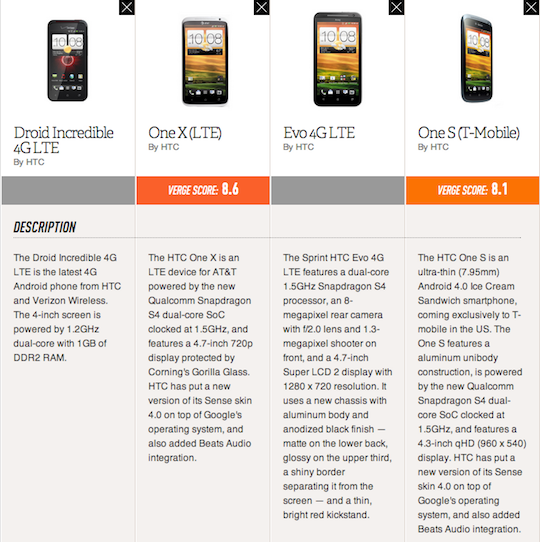