Reporting from ROFLCon III at MIT in Cambridge, Massachusetts, we find that not everything is LOL-worthy

I spent Friday and Saturday on the campus of MIT in Cambridge, Massachusetts attending ROFLCon III. What is ROFLCon? It's a biennial convention (this year was its third) held to celebrate and discuss internet memes and the celebrity that is often created alongside them. This year's invited guests included Chuck "Nope" Testa, Antoine Dodson, who became famous when he appeared on local news after a home invasion, Paul "Bear" Vasquez, AKA the "Double Rainbow" guy, and "Tron Guy" Jay Maynard. There are also internet celebs of a different ilk — people who have created loved and admired "works," like Chris Torres, creator of Nyan Cat, Matt Oswald, creator of the "Me Gusta" guy, or film editor Duncan Robson, creator of the very well known supercut "Let's Enhance." There were also academics, thinkers, and media on hand to round out the very diverse crew. Oh, and Scumbag Steve was there.

Like other conventions, ROFLCon is an assortment of prepared keynote speeches — this year's were by I Can Has Cheezburger's CEO Ben Huh and Jonathan Zittrain, Professor of internet law at Harvard University, one-off presentations, and moderated panels on topics such as "Life After the Meme," and "Webcomics: The Longview."

Unlike a lot of other conventions, however, the atmosphere is laid back and mostly everyone seemed to be having a pretty great time. I'll admit, I wasn't sure what to expect (this was my first ROFLCon) going in, but the fairly joyful environment caught up with me. The discussions at ROFLCon covered a wide assortment of topics ranging from the funny to the very serious — things like intellectual property law, and data management for huge sites such as Reddit and YouTube — but for the most part, there was a prevailing vibe of positivity that I at first found to be endearing and hard to disagree with, but ultimately left feeling unsettled about. 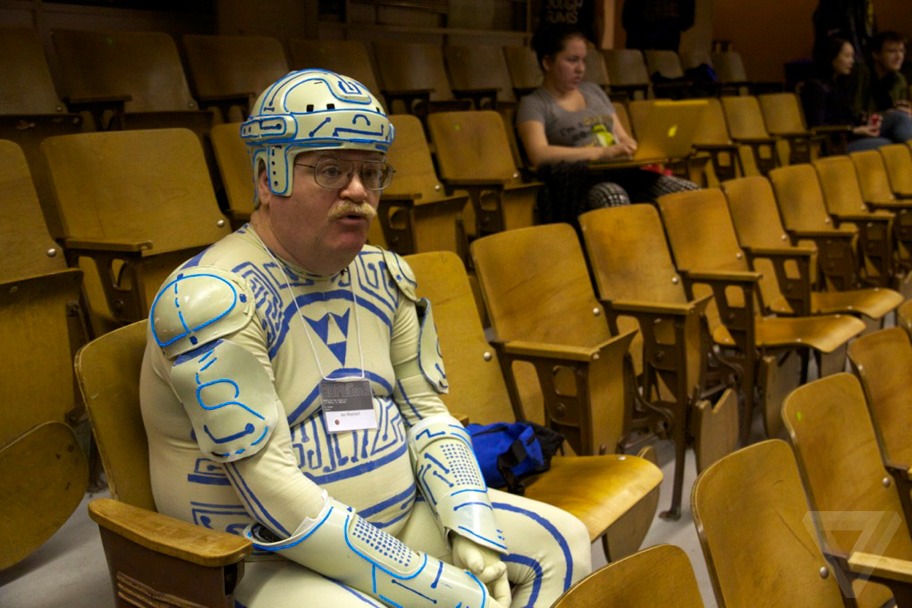 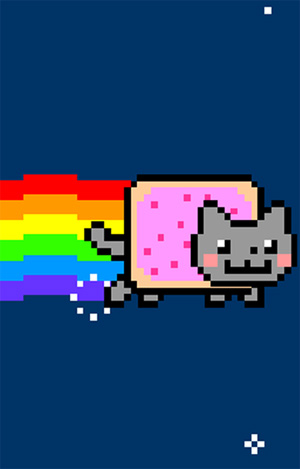 Many of the people I spoke with at ROFLCon, or heard speak, echoed similar sentiments: while they didn't feel a direct sense of ownership over their creation, recognition is always nice. This was true of Paul Vasquez, whose "Double Rainbow" video first attracted attention when Jimmy Kimmel Tweeted it, but quickly went even more viral a few days later when it was turned into a song by AutoTune the news (the same thing happened to Antoine Dodson's home invasion news appearance). Paul, who maintains that he "saw God" when filming the rainbow, won't put ads on his YouTube video, and removes other videos he finds which are direct copies, but allows people to freely "remix" his video for other purposes.

Chris Torres, who created the Pop Tarted body with the head of a cat known as Nyan Cat, had a similar experience. After creating the cat, it was another person who set the animation to the Nyan song, creating a truly viral phenomenon which has inspired video games and hundreds of items in Etsy shops. Torres told me that he has his limits when it comes to the remix culture of Nyan Cat, however. For instance, he said, he wouldn't like to see representations of Nyan Cat being hurt (neither would I). There is, however, an overall sense that the creations are, to various extents, out of the creator's control once they hit the internet. 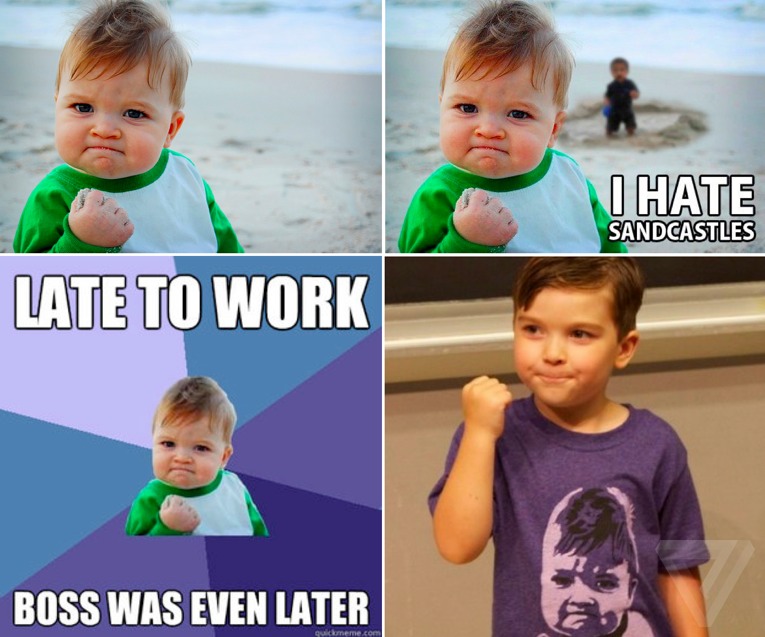 This is the essence of a meme, of course. The idea that an image or piece of video can be repeated, represented, played with and morphed over what is often a long period of time is central to a successful meme. Take for instance, "Success Kid." In 2007, Laney Griner uploaded a photo of her 11-month old baby Sammy on a beach eating sand, looking triumphantly at the camera, to her personal Flickr account. By early 2008, the image appeared on MySpace with the captions "Ima Fuck you up," and "I Hate Sandcastles." On stage at ROFLCon with Sammy, who is now nearly 5, Laney said she was at first confused. She didn't really know what memes were, and, she noted, Sammy loved sandcastles — he is, after all, eating sand in the photo. She wasn't pleased, at first, but Sammy really went viral when his photo began to appear with "advice animal" captions, befitting his victorious look in the photo. Captions like, "Put 5 dollars in pocket… pull out 10," and "Thought I only had one beer left… Two left" made Laney feel better, she said — once she "got it." Sammy's likeness was being used for something positive. The meme has generated hundreds of similarly captioned photos. The "Me Gusta" image, similarly, shows up ad nauseum in what are known as "rage comics," and creator Matt Oswald, who said it was drawn on a whim in 15 minutes before he uploaded it to 4Chan, says he doesn't even feel like he created it: the community, after all, gave it meaning, over months of repeating, morphing, and retelling. We can all agree that memes as we know them wouldn't be possible without the communities which create them through endless modification.

Another thing we can all agree on: memes and related internet culture are now mainstream. When ROFLCon started in 2008, memes were still for a niche (if very large) audience. There are great reasons for that. Memes don't explain themselves very well — you have to know how to read them, and you have to look at several examples before you "get" the joke. The barrier to entry on "getting the joke" varies: the Chuck Testa "Nope" advertisement is pretty funny regardless of who you are and what you know about the internet, but you have to know the video before you can see why the related images of Chuck with the caption "Nope!" are funny. This is true of most memes, and a few years ago, most people simply weren’t in on the joke. That is all changing very fast. Duncan Robson unveiled a new supercut, called "Three Point Landings" on Saturday, and the video already has nearly 100,000 views barely a day later. Nyan Cat makes an appearance in a Sprint 4G Nexus commercial entitled, "Cats," and Paul Vasquez and his Double Rainbow appeared in a Windows Live Photo Gallery commercial in 2010. Success Kid Sammy appeared on billboards in the UK for Virgin Media, as well as in a new Vitamin Water ad (Nyan Cat is in that one, too!). These companies are on the cutting edge of using the viral for advertisement, but they're also likely harbingers of where that advertising culture is going.

Of course, some people have managed to "profit," in more ways than one, from their often inadvertent brushes with celebrity. They get invited to ROFLCon, and they are genuinely adored by the people who attend. Some, such as Success Kid Sammy and his family, profit directly when they sell the rights to the image to Vitamin Water or Virgin Media. The Double Rainbow guy says he made enough money to "buy a used car" for his appearance in the Microsoft ad. Everyone at ROFLCon seemed to agree: good for them. But, at the same time, everyone also agreed that the continued right to remix those same images and videos should be a foregone conclusion. I won’t argue with that one: supercut videos like Duncan Robson’s excellent work simply couldn’t exist without this freedom. 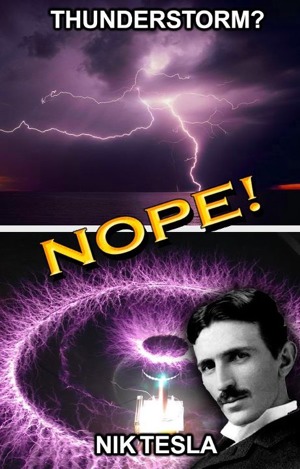 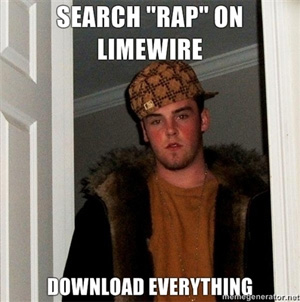 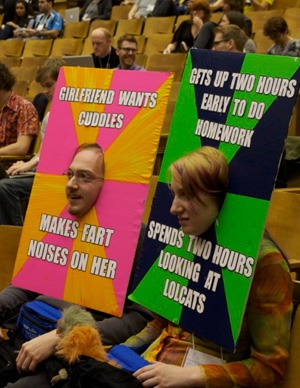 So what’s the problem? Antoine Dodson possibly said it best when he famously told Good Morning America that he had a "hit on iTunes" but was still "in the projects" in 2010. Now, it’s not like this guy wrote a great American novel, right? Right. The problem is that internet celebrities and memes are now making up a greater part of our "culture" than ever — and for some of us, they are almost the entirety of it. We consume them: we watch their videos millions of times, we caption their images freely and exuberantly, and the mainstream is waking up to that. But mainstream companies and their ad companies aren't playing for the same reasons — the mainstream is here to get paid. Many of the attendees whom I spoke to, once I talked to them long enough, mentioned that they weren’t really better off financially than they had been before creating whatever they created, or becoming a meme, or finding their little corner of celebrity. The problem with this model is not that the subjects of our internet culture aren’t profiting enough off of them: it’s that literally everyone else is. The companies who make ads to sell their phones, the massive websites which post them and sell highly profitable ads against them, the makers who create Nyan Cat scarves. These are often highly successful ventures with massive corporate structures behind them. Entire websites find their bread and butter in posting endless variations of Chuck Testa images, and it’s not just highly criticized sites like I Can Has Cheezburger; even CNN routinely gets in on the game these days. Chuck himself, is in many ways, a cash cow for plenty of websites, but he’s still running his taxidermy business, and told me flat out that he is "broke."

And, for what might be the first time, the creators of the content which we consume assert almost no right to it: they are happy, overjoyed, to be recognized and beloved. They’re just pleased to be at ROFLCon. Some, like Paul Vasquez and Antoine Dodson, who unsurprisingly have big personalities to capitalize on, are trying to take their fame a bit further, to make an economic enterprise of it. Most, however, are not: they’re regular people, or they’re artists, or people with other, regular jobs, whose kids just happened to be so cute they became a phenomenon on YouTube. And, as I said, that’s all well and good. The attendees at ROFLCon all agree, these people are treasures to a certain segment of the population. But increasingly, they are also a nearly endless fount of money-making possibilities, coming at little to no cost, with little to no gain for their subjects and creators.

It’s probably unsurprising that this year was the last ROFLCon: the convention is being put on indefinite hiatus. Memes are now mainstream, not just for us weirdos at the far corners of the internet anymore. As we make ourselves comfortable with that joyful, open, and free reality, we should probably begin to rethink what "free" means, because someone, somewhere, is already trying to think of awesome new ways to capitalize on your accidental brush with memedom. 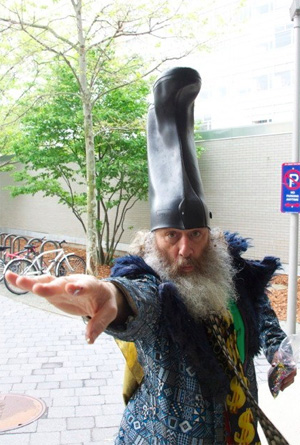 The GPU shortage is over