Clarion Next Gate hands-on: car-friendly entertainment, courtesy of your iPhone

Clarion Next Gate hands-on: car-friendly entertainment, courtesy of your iPhone

We got a chance to test out Clarion's Next Gate, an in-car infotainment system that's powered entirely by your iPhone.

Clarion announced the Next Gate infotainment system this morning, and here at CTIA in New Orleans we got a good look at the new system. The device is basically a dormant unit, a lifeless peripheral until you plug in your iPhone 4 or 4S. Once a phone is connected, the Next Gate uses iOS apps and services to power an in-car infotainment system — a long-press on one button launches Siri through the built-in microphone, another lets you make calls using the Next Gate display. The Next Gate does contribute, though, beyond just showing your iPhone apps on a larger screen: it actually converts the apps into a car-friendly UI, so you can navigate them more easily while driving.

The whole system worked pretty seamlessly as we tested it out, moving from the phone screen to a series of apps — a dozen or so are supported now, like Pandora and Odyssey navigation. Unfortunately, those dozen are the only apps you can use with the Next Gate, but the company promises it's working to add more to its arsenal. Pandora and TuneIn radio do indeed seem more driver-friendly with Clarion's interface, but the display is only 800 x 480, so it's not as nice to look at as the iPhone's screen. Since the Next Gate will cost $269 when it's released in June, it might be a hard sell when you could just use your iPhone anyway, but it's certainly a clever way to leverage all (or at least some) of the apps on your iPhone in a car-optimized way. 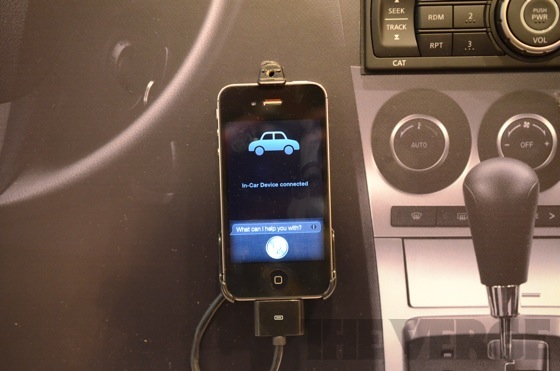