500px has updated its iPad photography app and removed all traces of "not safe for work" photographic content, citing the desire to provide a family-friendly viewing experience.

Tonight, 500px released an update to its popular iPad photo gallery app that contains a number of performance improvements and bug fixes. There's one particular note in the changelog that caught our eye, though: in version 1.4.1 of the 500px app, all traces of NSFW photographs have been completely removed. In the settings menu, what had once been a toggle for filtering out nude images is gone; replaced with an option that allows those on slower network connections to disable extra large high-res photos. We checked, and sure enough, NSFW shots that appeared on an iPad running a previous revision of the app were nowhere to be seen when we swiped through the Popular photos gallery post-update.

Prior to this evening, users had the option of viewing NSFW images either by logging in or tapping through a warning overlay that obscured photos containing nudity or other mature content. As for how the filtering system works, subscribers of the photo hosting service can tag their work as NSFW during the upload process, and 500px's community also has the ability to flag pictures as inappropriate for younger eyes. 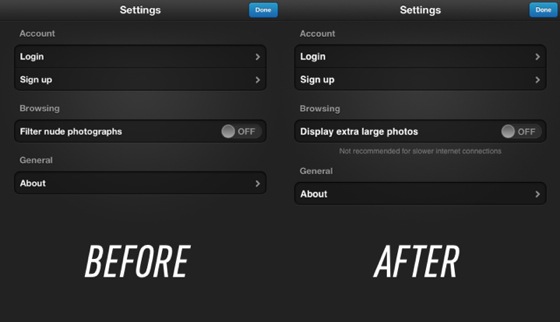 Why the change? Could this be an Apple-imposed move? Not exactly. We reached out to 500px COO Evgeny Tchebotarev for comment, and it turns out the decision was reached as part of an conscious effort to provide a more family-friendly viewing experience. "We believe that we can offer most inspiring and beautiful photos to all age groups, not necessarily restricting it to 12+ or 18+ categories," said Tchebotarev. He was quick to point out that customers can still view mature photography by signing in to the 500px website. You can read the COO's full statement below.

It wasn't Apple imposed change — we didn't talk to Apple regarding NSFW content. However, we believe that we can offer most inspiring and beautiful photos to all age groups, not necessarily restricting it to 12+ or 18+ categories. Therefore, we have made a minor change to our iPad app, so that it is free from NSFW content and is available for browsing with family, kids or during work breaks.

Members of 500px can still login on the site and enable or disable mature content (thus agreeing with our terms of use), but not logged in visitors do not have such an option.

Update: Mr. Tchebotarev took some time to clarify the situation further in our comments below. 500px subscribers still have the ability to view NSFW photographs across the company's mobile apps by enabling the option within their account settings at 500px.com. It's left off by default for new users, and NSFW shots remain unavailable to anyone that hasn't registered an account.