Instacast 2.0 has new features and a new pricing structure (hands-on)

Hands-on impressions of Instacast 2.0, a podcast app for iPhone.

Share All sharing options for: Instacast 2.0 has new features and a new pricing structure (hands-on)

We've been fans of Instacast for a while now, as Vemedio's app offers more podcast functionality than iTunes and the stock iOS Music app put together. It just got updated to version 2.0, and it's a pretty significant overhaul — there are new features, a new interface, and a new pricing model. To start with that latter point, Instacast now costs $0.99 in its basic form (down from $1.99), and offers a $1.99 in-app purchase for a pro version of the app that enables all of 2.0's new features. These include push notifications to let you know when a new episode is available (already available on iPad app Instacast HD), playlist management, download settings for individual podcasts, and the ability to add your own bookmarks. The Pro features are simple but effective, and you'll probably already know if you want them or not. Most people will likely be happy enough with the basic app, though. 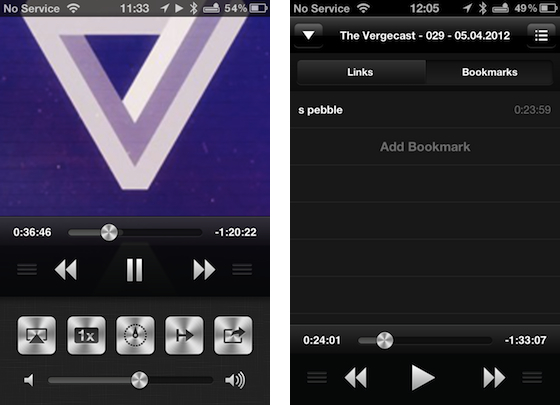 The main screen has a redesigned logo at the top and quick links to the new playlists and bookmarks features just below, but otherwise looks largely the same as before. It's all change in the player interface, though: you can easily view external links and bookmarks, and there's a slide-up bar at the bottom that offers extra controls and is accessed in the same way as the iOS lock screen camera shortcut. This is a nice idea, but it hasn't been fully thought through — for example, clicking a link in the main window while it's raised obscures the controls that let you pull it back down, forcing a restart of the app. The new control icons aren't very clear, either, and have a pretty ugly faux-metallic style that doesn't help matters.

You can now tweet direct links to specific parts of podcasts

Instacast 2.0 also has some new sharing features, the biggest of which is a discussion system that hooks into Twitter. If you're playing a podcast and hear something interesting that you'd like to tell the world about, you can tweet a web link that plays the episode from your starting point and gives others a comment box to share their thoughts from. For example, click here to jump straight to discussion of the S Pebble on last week's Vergecast. It's a clever system that will definitely make it easier for others to follow the conversation — 140 characters is short enough without having to make vague allusions to the content of a separate podcast. 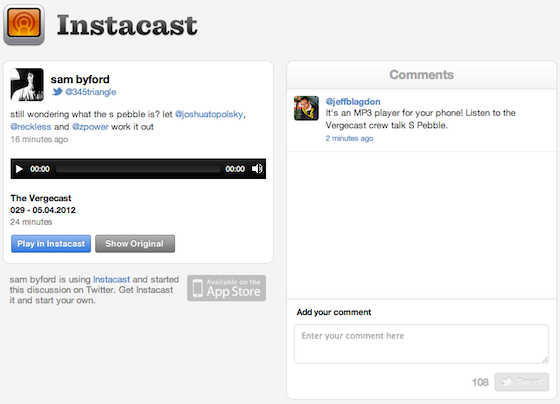 Instacast was already a really solid app, and it's better now than ever. At $0.99 it shouldn't be a hard sell for anyone frustrated with iTunes podcast management, and the Pro features are implemented well for those who need them. Perhaps more importantly, the sharing features could actually increase the level of discourse around podcasts as a whole. Instacast 2.0 is available in the App Store right now.