Oracle vs. Google hits the patent phase: the opening statements

The Oracle vs. Google infringement trial has moved on to the patent phase, with attorneys for both companies laying out their arguments.

Share All sharing options for: Oracle vs. Google hits the patent phase: the opening statements

The first phase of the Oracle vs. Google trial came to an end yesterday, as unsatisfying and unresolved as it may have been. We've quickly moved on to phase two, which trades copyrights and APIs for patents and virtual machines. At issue are two Oracle patents: RE38,104 and 6,061,520 (we'll refer to them as ‘104 and ‘520 for convenience). Oracle is alleging that the Dalvik virtual machine — the very heart of Android itself — infringes on both. Let's take a look at what both parties will be arguing over the next few days. 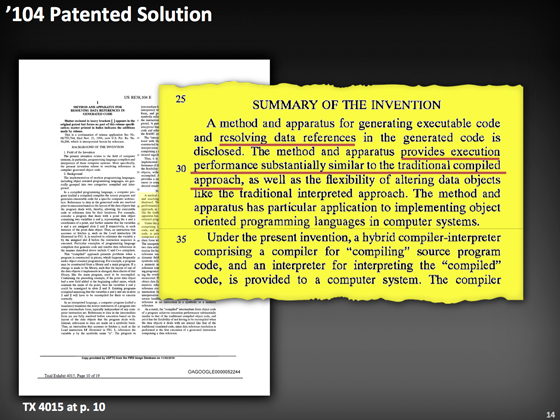 In its opening statement yesterday, Oracle framed the applicable claim in the '104 patent as a way for computers to improve performance. It's essentially a method for a computer system to call upon data stored in memory not by calling out the specific memory location itself, but rather by using a different name — called a symbolic identifier — that then dynamically resolves to the correct location. Oracle wasted no time following the same strategy it's been pursuing throughout this case, calling out comments that reference symbolic identifiers in the Dalvik code, as well as citing former Google engineer Dan Bornstein's deposition testimony, where he refers to the technique as well.

Google, of course, has a different take on things. This morning Google attorney Robert Van Nest drew a fine line of dinstinction between the claim in the '104 patent and the way Android achieves a similar solution, stating that in the mobile OS the system consecutively calls upon a series of different tables before landing at the final data an application may be looking for. "It's more like an address," he said, comparing Android's version to locating the President by looking up 1600 Pennsylvania Avenue; using a symbolic identifier would be more akin to going by "The White House." While the functionality may be similar to Oracle's patent, Van Nest argued, it's not an exact match, and therefore under patent law cannot constitute infringement. 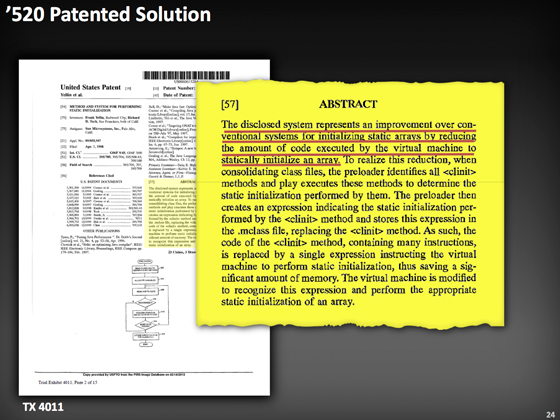 If you didn't have your fill of arrays during the rangeCheck testimony, you'll be happy to know that they're making a reappearance with the '520 patent. Here Oracle's patented invention consists of a way of using less system resources when a program or code sets up a static array of values. It does it, quite simply, by simulating the actual execution of the Java bytecode in question instead, resulting in less work for the virtual machine. With similar references to "simulation" in Dalvik, Oracle is relying on the same kind of guilt-by-context here. But again, Google is laying out its defense very precisely, pointing out that Dalvik uses pattern-recognition to assemble its time-saving data arrays rather than the simulation method from the '520 patent. Oracle counsel Michael Jacobs was quick to prep the jury for Google's defense in his opening statement, but we won't know who the jurors side with until the final verdict is in.

Of course, there's even more going on with both patents than the jury even knows at this point. Not only has Oracle significantly reduced the number of patents it had initially alleged were being infringed, but the patent claims asserted in '104 have in fact been recently rejected by the US Patent and Trademark Office in a post-grant re-examination proceeding. The decision isn't final by any means, but it's an interesting twist given that the jury has not — and will not — be made privy to the information, and should the patent be substantially amended or eventually declared invalid, any possible damages Oracle could be awarded would be moot.

Starting off testimony this morning, Oracle called Timothy Lindholm again, who was followed by a pair of technical experts. The latter two detailed the ways in which they had benchmarked the performance improvements Android gained with the alleged infringing use. The consensus had been that this phase of the trial wouldn't be nearly as dramatic as the copyright portion had been — Van Nest even told the jury to not expect any "celebrity executives" — but the intensity in the courtroom unmistakably rose when Oracle called Android head Andy Rubin back to the stand. He was questioned only briefly before testimony ended for the day, as Oracle tried to establish that Google executives were aware that Sun had patents in play, and that Mountain View had never bothered to investigate them in proper detail. Rubin proved to have the same elusive recall when it came to internal Google documents that he's had throughout the trial, but he's scheduled to be back on the stand tomorrow morning at 7:45am PDT. We'll be there to let you know what happens.