HP Envy Spectre XT ultrabook leaks on US site, along with Envy 4 and Envy 6 'Sleekbooks'

Share All sharing options for: HP Envy Spectre XT ultrabook leaks on US site, along with Envy 4 and Envy 6 'Sleekbooks'

HP’s new ultrabook lineup is live on its site, and in addition to the Envy 4 and Envy 6 we saw uncovered a few weeks ago, the company is also beginning pre-orders for an Ivy Bridge-powered Envy Spectre XT laptop.

There isn’t a lot of information on the new Envy Spectre XT, but we do know that it’s "as thin as" 0.57 inches (14.5mm) and starts at 3.07 pounds, making it one of the thinnest and lightest we’ve seen. In Envy 4 and Envy 6 news, it looks like the brushed metal chassis of the new Sandy Bridge-powered ultrabooks are getting some red accents, and the Envy 6 will be outfitted with a subwoofer for extra-bassy movies and music. 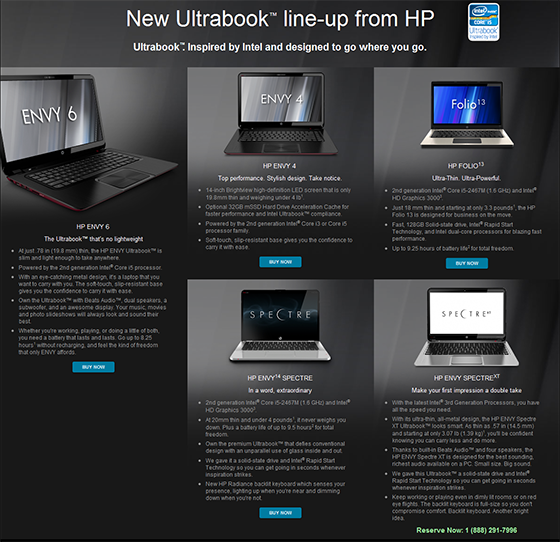 Interestingly, a registration page for HP driver and support alerts shows both the Envy Ultrabook 4 and 6, as well as an Envy Sleekbook 4 and 6 — we’ve never heard the term before, and it’s possibly just a way to distinguish between the Core i3 and Core i5 variants, but perhaps HP still has more surprises in hand. HP’s site gives users a "Buy Now" option for the Envy 4 and Envy 6, but the laptops still aren’t available for purchase from the online store — at least for the time being.