US government unveils new piracy warnings for DVDs and Blu-rays

The US government has teamed up with the six major film studios to unveil two new warning images for DVDs and Blu-rays to help prevent copyright infringement.

By Andrew Webster May 9, 2012, 8:55am EDT
Via Wired | Source US Immigration and Customs Enforcement

Share All sharing options for: US government unveils new piracy warnings for DVDs and Blu-rays

Several US government agencies have teamed up with the country's six major film studios to launch updated versions of the anti-piracy warnings that pop-up when you're watching a DVD or Blu-ray. There are actually two images now, the first of which bears the FBI anti-piracy warning badge alongside one for the Homeland Security Investigations division of the Department of Homeland Security. It also includes the familiar warning that copyright infringement "is punishable by up to 5 years in prison and a fine of $250,000." That updated screen will now also be joined by a new one from the National Intellectual Property Rights Coordination Center (IPR), which shows the department's badge and warns viewers that "piracy is not a victimless crime," before directing them to the IPR's site for more information. The new warnings should start showing up on select discs starting this week, so you better think twice before sending bootleg DVDs to soldiers overseas. 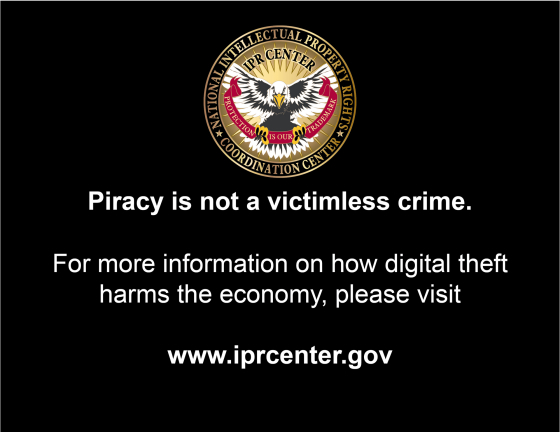