Pioneer's latest car navigation units come with a laser-projected heads-up display which layers augmented reality routes and data on top of your field of view.

Google's augmented reality glasses might be a long time coming, and there's no telling if we'll ever see Half-Life creator Valve release a heads-up display, but citizens of Japan with cars and lots of disposable income can buy a taste of the future this July with Pioneer's latest head units. The latest "Cyber Navi" decks not only have a full in-car entertainment suite with all the usual high-end trimmings, including GPS navigation, DVD playback, 1Seg television, and (in the more expensive VH99 version) a motorized retractable display, but they come with the final version of the laser-projected augmented reality navigation technology that the company prototyped a couple years back.

The package comes with a special translucent visor that clips onto your sunshade, which sits in front of your face while you drive. Then, a MicroVision laser projector beams images onto the screen, plotting a virtual GPS navigation path for you to follow in real time. The projector automatically adjusts brightness based on the ambient light, and it looks like it can fold out of the way. All of this is in addition to the existing augmented reality features that Pioneer introduced in last year's model, which were quite nifty in and of themselves: using a camera mounted on the front of a vehicle, they can track the position and distance of the car in front of you, highlight lanes, turns, speed limits and traffic lights, among other things. There's also an cellular USB modem with three years of free service included in the kit, for real-time traffic, weather, and a variety of miscellaneous connectivity. Early adopters will pay quite a bit though: the AVIC-ZH99 will reportedly cost ¥300,000 (about $3,765) and ¥320,000 ($4,015) for the AVIC-VH99. Find them both in Japan this July. 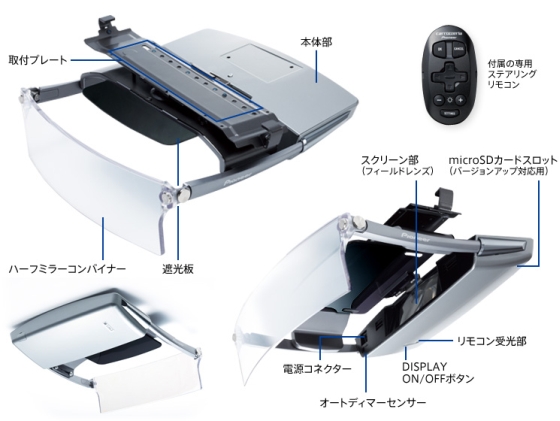