Tesla Motors has released revised range figures for the two top-of-the-line models of its forthcoming Model S sedan, with the car now quoted as being capable of up to 350 miles at 55 mph.

When Tesla officially announced the Model S electric sedan last year, it noted that there would be two high-end models with a 85kWh battery, each capable of a maximum range of 300 miles per change. The company has now completed its final optimizations on the vehicle, and it's been able to boost that to up to 350 miles when driving on the freeway, with a theoretical maximum range of more than 400 miles. Tesla breaks down the figures in a blog post, and while they do demand some rather idealized driving conditions — flat terrain, no wind, constant speed, and a brand-new battery — they're nevertheless impressive for an electric vehicle. Driving between 55 mph to 70 mph will net a range of 350 to 250 miles (the faster you go, the more your range drops). The peak comes in around 20 mph, perfect for city driving where owners can take advantage of the car's regenerative braking. 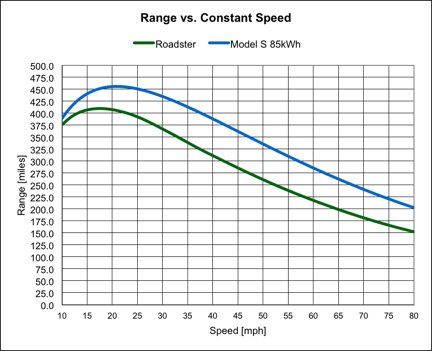 The range of Tesla cars is one area where they really stand out, particularly when compared to lower-cost electric vehicles. Of course, that comes at a price: the two 85kWh models are priced at $77,400 and $87,400. Tesla is confident consumers will take the leap, however; according to Reuters, the company is expecting 90 percent of its 2012 revenue to come from the Model S, and plans to deliver 5,000 sedans by the end of the year. With over 10,000 reservations taken already, and deliveries planned for July — a month ahead of schedule — we'd say the company has reason to feel bullish.