As the globe moves to mobile, advertising dollars lag far behind

As the globe moves to mobile, advertising dollars lag far behind

The massive shift of consumers from desktop to mobile devices is far outpacing the advertising industries ability to transition and monetize.

The speed and scale with which people around the world are shifting from their PCs and laptops to tablets and smartphones far exceeds any previous technological upheaval. As veteran internet analyst and venture capitalist Mary Meeker points out in her latest presentation, this is causing big problems for web companies that rely on advertising, as the rapid move to mobile isn't matched by a similar transition in ad dollars.

"Mobile as a viable advertising medium is in its infancy. It’s entirely understandable that there is going to be a supply and demand imbalance with the growth we are seeing today," said Eric Litman, founder and CEO of Medialets, which works with big brands to create HTML5 ad units that work across different operating systems and devices. For companies like Facebook and Twitter, he says, that presents a big problem. "Right now the huge amount of available mobile inventory is really keeping prices down.If you're a real estate agent in Nevada, you aren't telling your clients about all the empty houses down the block."

There are now 1.1 billion people around the world with 3G mobile internet access, a 37 percent jump from a year ago.

This is going to get worse before it gets better

But as Meeker points out, there is still plenty of upside to mobile, because with 6.1 billion mobile phone subscribers, smartphones have just 18 percent penetration into the total market. An astonishing 29 percent of American adults now own a tablet or e-reader, up from just two percent in 2009. In India, mobile is now the dominant mode for using the internet, passing the desktop last month. Moore's Law comes to mind when Meeker points out that iPad adoption was three times faster than the iPhone, and Android grew four times faster than its Apple rival. 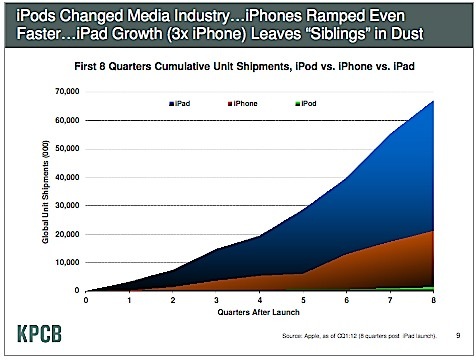 From a business perspective, that leaves a lot of catching up to do. Mobile ads produce about one-fifth the revenue of their desktop counterparts. And even for companies that aren't about advertising, like Zynga, mobile revenue per user is one-fifth the amount they earn from desktop consumers. As Meeker highlights, this is restraining revenue growth for companies like Google and Facebook, whose users are increasingly accessing their services from mobile devices. The sharp shift to mobile forced the social network to raise some red flags in the weeks leading up to its IPO, a move which many have blamed for the stock's disastrous early performance.

Mobile advertising is still in its infancy

For the next few years many companies will see their revenue growth squeezed as advertising dollars take their time migrating to mobile. At a panel discussion on digital advertising at the New Museum in New York this week, Meeker's presentation was on everyone's mind. "Mobile advertising is going to have massive problems getting to scale," said Brian Adams, the co-founder and CTO of Admeld, which was acquired by Google last year. "You've got to deal with fragmentation across operating systems, devices and browsers. With Amazon and perhaps Facebook poised to enter the mobile hardware business in a big way, this is going to get worse before it gets better."

In some ways mobile holds the key to the holy grail of advertising, capturing perfectly a person's intent based on in depth data about who they are and more importantly, where they are. "Location is a key vector in all this, but there is one thing holding it back right now," said Darren Herman, the chief digital officer at ad agency kbs+p. "Lawyers. Most of the apps grabbing your location data on smartphones these days are not sharing that with advertisers because of legal concerns around privacy."

It's getting to the point where tried and true Mad Men are thinking twice about how to spend their clients money. While they remain bullish about the long term future of mobile advertising, many are being honest with their clients for the time being. "For publishers, increasingly the answer is subcription fees, paywalls, app sales and other alternatives," said Herman. "I work in advertising, but when we talk with big clients about how to budget their media plans, increasingly the answer is to look for other alternatives."