The 498 ppi display is stunning

The two companies showed off their research at a press event in Tokyo, bringing with them a prototype 6.1-inch LCD display with a remarkable 2560 x 1600 resolution. At 498 ppi, the prototype offers even more pixels per inch than LG's 5-inch 1080p display from earlier this week. We haven’t seen the LG display to be able to compare, but Sharp’s is absolutely stunning up close. The company says the new technology has other benefits as well, including much lower background noise when used in touchscreens, and the ability to produce much narrower bezels (pictured below).

It’s been said that the human eye can’t perceive individual pixels from cellphone-wielding distance at over 300 or so per inch, but the photographs Sharp had loaded on its prototype display were stunningly crisp and detailed. We would have to compare the two devices side-by-side to form a definitive opinion, but 498 ppi was enough to make us temporarily forget about the HTC One X’s 720p LCD display. The picture below is a 100 percent crop of one of the test images, taken at our 30mm macro lens’s minimum focusing distance (about 1 inch). 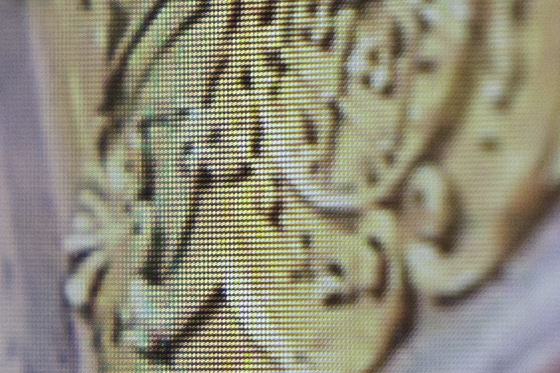 If demand is there for OLED, Sharp wants to fill it

The event wasn't all about LCD, though — Sharp was also showing off some OLED displays with CAAC-IGZO transistors, including a 13.5-inch 3840 x 2160 prototype for laptops and a 3.4-inch flexible display at 540 x 960 resolution. Both displays looked impressively sharp and the high (326 ppi) pixel density showed off OLED’s trademark contrast and black levels. While Sharp hasn’t yet entered the OLED market, Sharp's president Takashi Okuda told the crowd that there are no technological barriers standing in the way of production — whether or not Sharp decides to start making the displays will depend on what the market does. If the demand is there for OLED, Sharp wants to fill it.

Okuda told press that the company is aiming to begin large-scale production of CAAC-IGZO LCD panels this fiscal year. Unsurprisingly, he didn’t let any news slip about plans to supply Apple with IGZO panels for its next generation of products, but given Cupertino’s penchant for purchasing top components, and Hon Hai Precision’s recent acquisition of a major stake in SDP — the panel venture that was formerly a partnership between Sharp and Sony, we certainly wouldn’t be surprised.