The Verge has received pictures that seem to be of the T-Mobile USA variant of Samsung's Galaxy S III.

The Verge has just received alleged pictures of T-Mobile USA's branded Samsung Galaxy S III that's expected to be announced in the coming weeks. The strangest thing about the leaked phone is what isn't different about it — it appears to be virtually identical to the model being offered internationally, a stark contrast from years past where Samsung has typically bowed to American carrier pressures for customization (a common change on the North American Galaxy S and S II variants, for instance, was the replacement of the physical home button with a full row of four capacitive buttons). What's more, it seems that white and slate blue will again be the color choices here; it's not to say that other (larger) American carriers will follow suit, but it's a notable trend and a hint that Samsung might be starting to wield its enormous power as the largest Android OEM in the market.

We have no information on the images that would indicate pricing or availability, but signs are currently pointing to this month. 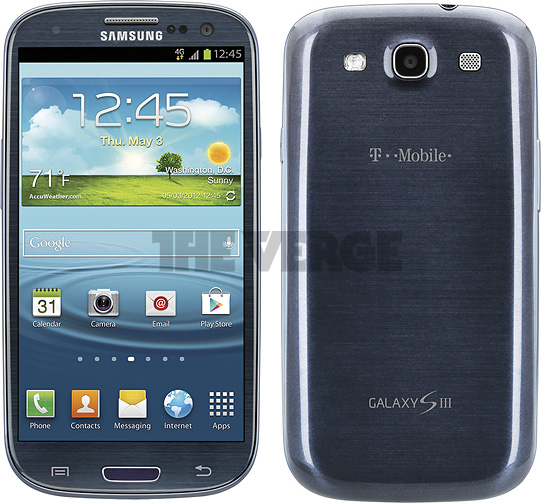 More from this stream Samsung Galaxy S III comes to the US: Verizon, AT&T, Sprint, T-Mobile, and more