Apple has officially unveiled iOS 6 at its Worldwide Developers Conference today, the next version of its mobile platform.

Apple has officially unveiled iOS 6 at its Worldwide Developers Conference today, the next version of its mobile operating system used by the iPhone, iPad, iPod touch, and Apple TV. iOS has consistently received a significant update every year since its introduction in 2007 — and by all appearances, version 6 will continue that trend with a claimed 200-plus new features. It'll be available for the iPhone 3GS and later, the 2nd- and 3rd-generation iPad, and the 4th-generation iPod touch in the fall, though it warns that "some features may not be available on all products." Meanwhile, a beta is available to developers today.

Among them, Siri gets updated with iPad compatibility, support for sports (including scores and statistics) and restaurant selections sorted by rating; you can book a table via OpenTable right from Siri's interface. Movie listings have been added as well with Rotten Tomatoes integration, important for avoiding the duds. Perhaps most importantly, Siri can now launch apps — just speak the name of the app and it'll open. A number of new languages are being added, including Chinese and Korean.

Twitter got official iOS integration in version 5; this time around, Apple's adding Facebook complete with contact integration and notification support for Facebook messages. Both Facebook and Twitter are also getting "tap to post" right from the Notification Center — no need to go into the app to write a new status update. Facebook friends will also be able to see which App Store apps you like, and you'll even have friends' birthdays automatically integrated into your calendar.

On the phone front, Apple is adding a feature that several other phones have added in the past: text replies right from the call screen, so that you can immediately text back if you can't take a call — you can select from a list of prewritten messages at the time of rejection. A new Do Not Disturb mode allows you to completely turn off incoming calls and messages on a schedule of your choosing and whitelist certain people — interestingly, you can also set it up so that if someone calls twice within a set period of time, the second call will come through.

FaceTime is finally going live over cellular, an oft-requested feature since the iPhone 4's launch. Apple is also unifying Apple IDs and phone numbers — if someone calls or messages your phone number, you'll be able to answer from your Mac or iPad.

Mobile Safari is being updated with a couple popular features: iCloud tabs — not unlike Chrome Sync — and an offline reading mode which could steal thunder from a number of popular third-party apps. In landscape mode, you'll now be able to go fullscreen.

For photos, Apple is tweaking its Photo Stream service introduced last year with "shared" Photo Streams; you can select people with whom to share your photos and they'll get a notification whenever you post a new photo. It feels like it encroaches on Facebook's territory a bit — particularly odd considering that Facebook integration figures prominently into the version 6 story.

For Mail, iOS 6 gets one big feature that Mountain Lion is also getting: VIPs, special contacts for whom the user will receive special notifications. Videos and photos can now be inserted inline in messages — a desperately overdue feature — and the client now features pull-to-refresh.

Next, iOS 6 gets an all-new app, Passbook, that Apple says is "the simplest way to get all your passes in one place." Boarding passes, rewards cards, movie tickets — pretty much anything with a barcode can be collected here for easy access. 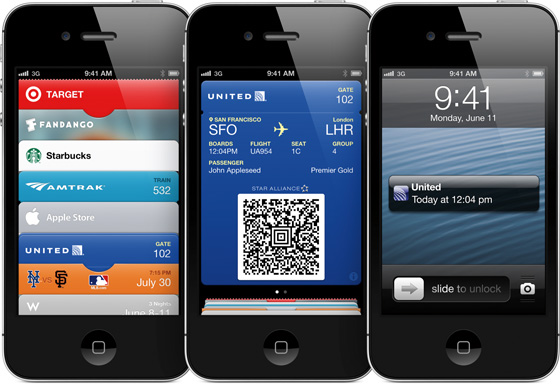 Accessibility gets tweaked here as well: iOS 6 introduces Guided Access, which allows users to selectively disable certain parts of apps and / or hardware buttons — Apple gives the example of autistic children whom you may want using certain apps, but don't want them to be able to use all of it or to cycle out of the current app.

Maps with turn-by-turn navigation and Flyover

And here's the big one: Maps, which extricates Apple from the Google Maps ecosystem and replaces it with a homegrown solution. The new version of Maps has 100 million business listings fortified with Yelp integration, traffic reports (collected the same way Google does, using anonymous real-time crowdsourced data from phones), and turn-by-turn navigation that can work directly from the phone's lock screen. Siri integration lets you ask questions like "are we there yet" and get an answer with the estimated arrival time. Maps also includes the rumored 3D mode, called "Flyover," which has 3D models of cities around the world.

Enhancing Apple's existing Find My iPhone service, a new Lost Mode allows the owner to send a phone number to the phone — whoever finds it just has to tap a message to call you back (assuming the finder is a good samaritan, of course).

As was rumored in recent days, Apple will be adding Baidu integration specifically for the Chinese market, along with Sina Weibo, Tudou, and Youku. The company is also promising "improved" Chinese text input along with a built-in dictionary.

iOS 6: everything you need to know